Update Required To play the media you will need to either update your browser to a recent version or update your Flash plugin.
By VOA
04 June, 2015


Ukrainian President Petro Poroshenko said Thursday that 9,000 Russian troops are in the rebel-controlled area of eastern Ukraine. He said there is a huge threat of new attacks on Ukrainian forces.

VOA reporters in the area saw a number of Ukrainian soldiers arriving at the train station in the eastern city of Kramatorsk. The reporters also saw Ukrainian troop carriers on the move in the town.

Ukrainian officials say the fighting this week began near Donetsk. They say about 1,000 pro-Russian rebel fighters launched an early morning attack just west of the city. 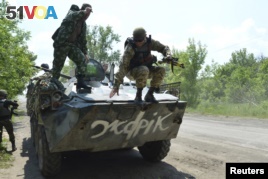 Russia denies having any troops in Ukraine, and says any Russian citizens there are volunteers.

Islamic State militants have closed a dam on the Euphrates River in western Iraq. The move has reduced the water flow to government-held areas of Anbar province, an official said Thursday.

The militants have redirected the flow of water to the battlefield around the city of Ramadi. They captured the town last month. The move also threatens to create extremely dry conditions in Iraq's southern provinces.

An Egyptian appeals court ruled that former President Hosni Mubarak must face a retrial on murder charges. The case involves the killing of protesters during the 2011 uprising that forced Mr. Mubarak from power.

The court action cancelled an earlier ruling that had removed the murder charges. The judge said the second and final trial will begin November 5.

The 87-year-old former leader has been in prison since his arrest in 2011. Mr. Mubarak ruled Egypt for 29 years.

The number of dead continues to increase three days after a ship capsized in China's Yangtze River. Questions about what happened also remain unanswered.

Government media says the official number of dead is 75. The ship was carrying 456 people. Fourteen have been rescued. Most of the passengers were tourists over the age of 60.

The Chinese government is increasing its efforts to limit damage to its reputation from what could be the country's worst maritime disaster in years.

dam n. a structure that is built across a river or stream to stop water from flowing

capsize – v. to turn over : to turn so that the bottom is on top

maritime– adj. of or relating to sailing on the sea or doing business (such as trading) by sea