Update Required To play the media you will need to either update your browser to a recent version or update your Flash plugin.
By Dan Novak
22 January 2023


Government science groups say that 2022 did not quite set a record for heat. But it was in the top five or six warmest years on record. The exact placement depends on who was doing the measuring.

The U.S. National Oceanic and Atmospheric Administration (NOAA) measured 2022's worldwide average temperature as 14.76 degrees Celsius. That ranks as the sixth-hottest year on record. Four other scientific agencies or science groups around the world put the year as either fifth or sixth hottest. 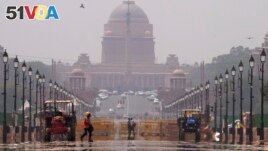 FILE - A construction worker walks across a road during a heat wave, in New Delhi, May 2, 2022. (AP Photo/Manish Swarup)

Bill Nelson is the NASA Administrator. He said the worldwide temperature is alarming. "What we're seeing is our warming climate, it's warning all of us... Extreme weather patterns threaten our well-being across this planet."

Berkeley Earth is a nonprofit group of independent scientists. It said 2022 was the fifth-warmest year on record around the world. It noted that for 28 countries it was the hottest year on record.

The possibility of Earth warming beyond the 1.5 degree Celsius limit that world leaders set in 2015 is increasing with every year, said the World Meteorological Organization. Russ Vose from NOAA said there is a 50 percent chance of hitting 1.5 degrees Celsius temporarily in the 2020s.

La Nina, a natural process that changes weather worldwide, is in its third straight year. It is an event that reduces temperatures around the world. Gavin Schmidt is director of the NASA Goddard Institute of Space Studies. Schmidt found that last year La Nina cooled the overall temperature by about .06 degrees Celsius and that last year was the hottest La Nina year on record.

Kathie Dello is the North Carolina state climatologist. She said that historically, La Nina would reduce worldwide temperatures. "Now, heat-trapping gases are keeping the temperature cranked up and handing us another top-10 warmest year on record."

La Nina is likely weakening. But there is a possible El Nino on the way, which warms overall temperatures. Schmidt said this year will likely be warmer than 2022. And next year, he said, an El Nino "would suggest that 2024 would be the record warmest year by quite a large amount."

Scientists say about 90 percent of the heat trapped by greenhouse gases goes into the upper 2,000 meters of the ocean. Data released Wednesday show that 2022 was another record year for ocean heat.

John Abraham of the University of St. Thomas wrote a study on ocean temperatures. He said, "There's a real good connection between the patterns of ocean warming, the stratification, and then the weather that we experience in our daily lives on land," including stronger storms and rising seas.

In the United States, global warming first received attention in 1988. That year would go on to be the record warmest at the time. Now, 1988 is the 28th hottest year on record.

The last year that the Earth was cooler than the 20th century average was 1976, NOAA says.

alarm — v. to cause to feel a sense of danger

crank — v. to increase something especially by a large amount

greenhouse gas — n. gas that cause the warming of the earth's atmosphere