Why Did Students Struggle Most in Math during the Pandemic?

Update Required To play the media you will need to either update your browser to a recent version or update your Flash plugin.
By Dan Novak
06 December 2022


Students at American public schools struggled in math during the pandemic.

The National Assessment of Education Progress (NAEP) is a math and reading test given to fourth and eighth grade students in public schools around the country. Results from this year showed that students' scores had the largest decreases in math since 1990, when the test was first released.

All areas of the U.S. reported lower test scores in math. More than one-third of students scored below basic levels. The decreases were also more severe in math than in reading. 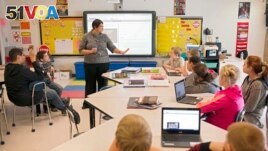 FILE - In this photo taken Feb. 12, 2015, sixth grade teacher Carrie Young guides her students through an exercise on their laptops. (AP Photo/Ty Wright)

There has been a lot of evidence showing that students struggled with remote learning during the pandemic. They especially struggled with math, said Frances Anderson. She is an education researcher with the University of Nebraska-Omaha and a former teacher. Her work centers on math ability.

She said in an interview with The Conversation that students, who are not as skilled in math, need more face-to-face learning.

Anderson said that during remote learning, "teachers didn't have as many ways to keep students engaged. It was difficult to do hands-on activities and project-based learning, which are better for students who struggle in math."

She added that a lot teaching math is visual learning. "You need so much more than one screen," she said.

Heather Hill and Jon Star are professors at Harvard University's school of education. They spoke on Harvard University's education podcast about the NAEP results. Hill said "math scores have always been more sensitive [than reading and English scores] to students' opportunities to learn."

She said a lot of reading skills are developed in the home, in addition to school. Kids can read books and the internet at home, or read text messages from friends, for example. But there are fewer ways for kids to work on math skills outside of the classroom.

"School is the only place that kids, for the most part, learn math," Hill said.

Star, who is also a math teacher, argued that NAEP scores were low for eighth graders because of the age at which these students started learning remotely. He said that the two years leading up to eighth grade, where scores declined the most, are extremely important for building math skills. He said those are the years when students start moving from arithmetic to algebra, and other more complex mathematics. The NAEP for eighth graders largely tests algebra skills.

"So...it's no surprise that they're really struggling. Those struggles are not going to be easy to make go away," Star said.

He added that in online learning, teachers were forced to teach math using the "least desirable aspects of math instruction that we would want to see." Teachers had to lecture more and there was less student interaction, which is not as effective for math instruction, he said.

"It's not necessarily the teachers' fault, it's just the way that they've been forced to teach during the pandemic," Star said.

Hill added that there is some evidence that teachers do not perform as well when they teach math. Often, teachers do not especially enjoy math, nor think of themselves as math experts, she said. And that feeling can make it hard to teach the subject confidently.

Both said it is going to very difficult for schools to make up for learning losses during the pandemic, especially for the students who struggled the most. Especially with math, students returned from the pandemic with uneven abilities. It can be hard for teachers to form lesson plans for entire classes when the skills are so varied among students, Star said.

They agreed that to make up for the loss in learning, students are going to need a lot of extra help outside the classroom.

"Students who have fallen behind should have twice as much instruction," said Anderson, from the University of Nebraska.

Resources should go to students and communities which struggled the most, often minorities, Hill suggested. For example, tutoring students in small groups can help kids catch up in math.

Hill said although difficulties lie ahead, "kids are pretty resilient. You give kids opportunities to learn and they learn stuff."

remote — adj. connected by a computer and not in a place such as a school or office

engage — v. to get involved or be interested in something

arithmetic — n. the part of mathematics that deals with adding, subtracting, multiplying and dividing numbers

lecture — n. a talk or speech given to a group of people to teach them about a subject

resilient — adj. to become healthy, strong or to recover after something bad happens

opportunity — n. the chance to do something