Update Required To play the media you will need to either update your browser to a recent version or update your Flash plugin.
By VOA
22 January, 2015 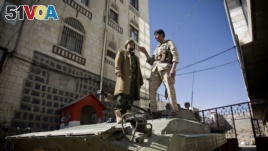 Witnesses said Houthi rebels remained outside the president's house in the capital city of Sana'a Thursday.

Mr. Hadi's government has been a close ally to the U.S. in the fight against Yemen's powerful Al-Qaida in the Arabian Peninsula.

Both Ukraine and Russia have blamed each other for the attack.

Russia's foreign minister called the bombing "a crime against humanity." He also asked for an independent investigation of the events.

A Ukrainian military spokesman denied government troop involvement in the bus attack. He said their closest position is too far away from Donetsk for its artillery to reach the area.

The United States and Cuba held a second day of meetings Thursday in Havana. Today's talks centered on plans to reopen embassies in each other's capitals.

On Wednesday the talks mostly centered on immigration. The delegates discussed the U.S. policy that permits Cubans to stay in the United States once they step foot on U.S. land. The Cuban government says the law encourages Cubans to make dangerous boat trips to reach the U.S. state of Florida.

witness – n. a person who sees something (such as a crime) happen

trolley – n. an electric vehicle that runs along the street on tracks

encourage – v. to make (someone) more determined, hopeful, or confident