Update Required To play the media you will need to either update your browser to a recent version or update your Flash plugin.
Joe DeCapua
June 15,2015


A new research project focuses on Africa’s capacity to prevent, contain and resolve conflicts. The Canadian-based Center for International Governance Innovation said a better understanding is needed of the dimensions of armed conflict and power struggles.

The center, known as CIGI, has released a report called Conflict in Africa: Diagnosis and Response. It considered how political violence, weak institutions, ethnicity, religion and identity contribute to conflict on the continent.

Former U.S. Assistant Secretary of State for African Affairs Chester Crocker, a distinguished fellow with CIGI’s Global Security & Politics Program, said, “We were not only looking at violent extremism. We’re looking at other kinds of conflict patterns that exist, including conflicts that are spawned by criminal networks – conflicts that are aggravated by pirates and by traffickers – conflicts that are simply based on based on identity struggles and struggles for power between different competing groups. What’s going on in Burundi right now is basically a power struggle.”

As for violent extremism, the U.S., France and others have helped African countries deal with the threat. But Crocker said a military response is not enough. The root causes must be addressed. 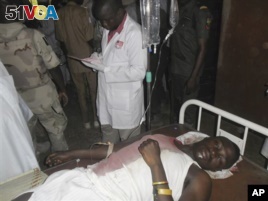 A student wounded during a suicide bomb attack at the College of Administrative and Business Studies receives treatment at a hospital in Potiskum Nigeria Friday, May 8, 2015. Suspected Boko Haram extremists attacked a business school in northeast Nigeria with gunfire and two bomb blasts. (AP Photo/Adamu Adamu)

“In some cases,” he said, “what happens is that there’s a weak state with a limited capacity in remote areas of a country. We’ve just seen that pattern in Nigeria with Boko Haram. And you know that some of the people who get recruited and sucked in to those kinds of movements like Boko Haram basically don’t have any other career options and they’re unemployable and unemployed. And the government has ignored them and the local authorities haven’t known what to do with them. And so, you know, nature abhors a vacuum and Bobo Haram has filled it.”

“We can help you. We can deliver things to you. We can give you jobs. We can give you guns. That sort of thing. So, as I just said, you’ve got to watch out for vacuums. Vacuums are dangerous. And so the answers are not just military. They’re also in terms of governance in a broad sense,” he said.

The CIGI report described Africa’s conflicts as “diverse and complex, and efforts at managing and resolving them are mixed.”

“Well, it’s primarily Africa’s job and the job of African countries and African governments and leaders to address those issues. And I would underscore that. I don’t think anyone from the outside world can solve those problems, but we can certainly partner with African partners in helping to deal with them. And we do it, I would say, both institutionally and we do it selectively. And this is not charity. This is not dependence. This is mutuality and inter-dependence between African states and societies and Africa’s friends outside,” said Crocker.

Crocker said, “What we’d like to see is stronger recognition that the coercive tools may open the door, open the window, for constructive initiatives. But they don’t provide solutions by themselves. You need to be able to connect the actions of peacekeepers to the actions of mediators. You need to connect the action of mediators to the people who live in these societies, ordinary societies, at the village level and at the town level and at the city level.”

He added that a regional approach is needed to address many of Africa’s problems.

“I think the toughest problems that Africa faces in the security space are regional problems where you have a large state that finds it difficult to provide governance all the way across the country, for example, the DRC. That becomes a regional problem for the DRC’s neighbors and vice-versa. They interfere across borders in both directions. It’s also a regional question when you look at the Sahel and the armed militias that have sprung up in the wake of the overthrow of Gadhafi in Libya.”

CIGI said that “even highly sophisticated approaches to conflict management, such as the United Nations, can affect only some of the dynamics of conflict.”

The Conflict in Africa report recommended ending power struggles – like in Burundi – by “using incentives to negotiate an agreement or consent to elections rather than using force to settle the dispute.”

For weak institutions, it called on donors to “focus on building up more representative and responsive governmental institutions.”

And for identity divisions, the CIGI report recommended NGOs and others help “build relationships between antagonists,” through dialogue, people-to-people programs and problem- solving workshops.