Update Required To play the media you will need to either update your browser to a recent version or update your Flash plugin.
By VOA
Oct 24, 2017


When President Donald Trump outlined his administration's comprehensive strategy toward Iran, he not only highlighted his concerns with the nuclear deal, known as the JCPOA; he stressed the necessity of countering Iran's support for terrorism and its destabilizing activity in the Middle East.

That support stretches from the regime's earliest days, when its agents seized the U.S embassy in Tehran. It includes Iran's founding and funding of Hezbollah, whose operatives bombed the U.S. embassy in Lebanon twice in the 1980's; and its backing of groups in Iraq and Afghanistan that have killed hundreds of American military personnel. 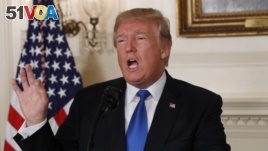 “The regime remains the world's leading state sponsor of terrorism, and provides assistance to Al-Qaida, the Taliban, Hezbollah, Hamas and other terrorist networks. It develop, deploys, and proliferates missiles that threaten American troops and our allies. It harasses American ships and threatens freedom of navigation in the Arabian Gulf and in the Red Sea. It imprisons Americans on false charges.”

President Trump stressed that Iran's antagonistic behavior is not directed at the United States alone: it violently suppresses its own citizens and others in Iran and has fueled sectarian violence in Iraq and vicious civil wars in Yemen and Syria, where its support props up the Assad regime - a regime that uses chemical weapons against helpless civilians, including children.

President Trump said that after consulting U.S. allies, the new strategy will best address the full range of Iran's destructive actions. It includes working with partners to counter the regime's support for terrorist proxies; placing additional sanctions on the regime to block its financing of terror; addressing Iran's proliferation of missiles and the actions that threaten global trade and freedom of navigation; and, finally, denying the regime all paths to a nuclear weapon.

The execution of this strategy includes the U.S. imposing sanctions on the Islamic Revolutionary Guard Corps for its support for terrorism. President Trump urged U.S. partners to join the United States and take strong actions to curb Iran's continued dangerous behavior.

“We hope these new measures directed at the Iranian dictatorship,” he said, “will compel the government to reevaluate its pursuit of terror at the expense of its people.”