Update Required To play the media you will need to either update your browser to a recent version or update your Flash plugin.
By VOA
Oct 17, 2017


U.S. senior counterterrorism officials briefed reporters recently on the dangerous activities of the terrorist group Hezbollah, both worldwide and in the United States.

Although it pretends to be a legitimate party, Hezbollah's penchant for violence has not changed for the last three decades, said Nicholas Rasmussen, Director of the National Counterterrorism Center. 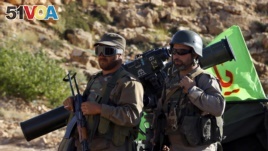 Hezbollah fighters stand on their army vehicle in Wadi al-Kheil or al-Kheil Valley in the Lebanon-Syria border. (File)

Americans first saw the deadly nature of the group, he noted, with the fatal attacks on the U.S. embassy and on the Marine barracks in Beirut in 1983:

“In 2012 the group carried out a bomb attack in Bulgaria that killed five Israeli tourists and one Bulgarian national, and a number of Hezbollah operatives have been caught laying the groundwork for attacks in places like Azerbaijan, in Egypt, in Thailand, in Cyprus, and in Peru,” he said.

Other instances of the group's deadly work include the assassination of former Lebanese Prime Minister Rafik Hariri in 2005; the killing at least 84 Lebanese citizens and wounding of almost 200 more in Beirut in 2008; the ongoing buildup of weapons in Lebanon in violation of UN Security Council resolutions; the perpetuation of conflict across the Middle East in places like Iraq, Yemen and Syria.

Concerning the homeland, Director Rasmussen cited the arrest in June of two individuals, one in New York and one in Michigan, who were operating on behalf of Hezbollah's international terrorist unit -- a stark reminder, he said, of the group's global attack on infrastructure, as well as its aspirations to potentially carry out attacks in the United States.

U.S. Ambassador-at-Large and Coordinator for Counterterrorism Nathan Sales noted that Hezbollah's ability to become the global threat it is today is the result of the assistance it receives from one source -- Iran:

“The Iranian regime has built and bankrolled Hezbollah to foment instability throughout the region and across the world. This has all come at the expense of the Iranian people, whose resources are being diverted to support Hezbollah's bloody cause, and at the expense of Lebanon, which has suffered grievously from Iran and Hezbollah's deadly partnership. The people of Iran and the people of Lebanon deserve better than this,” he said.

Ambassador Sales promised that the United States and its allies will aggressively target Hezbollah's terrorist infrastructure and financial support networks: “We will deny it the resources it needs to carry out its deadly attacks, and we will bring its leaders and operatives to justice.”