Update Required To play the media you will need to either update your browser to a recent version or update your Flash plugin.
By VOA
Jul 19, 2017

“Tens of millions of people are in need of humanitarian assistance as a result of the man-made crises in South Sudan, Nigeria, and Yemen, all of which are driven by violent conflicts, and in Somalia, where ongoing conflict is exacerbating the effects of severe and prolonged drought,” said Acting Assistant Administrator for the USAID's Bureau for Democracy, Conflict, and Humanitarian Assistance, Robert Jenkins. 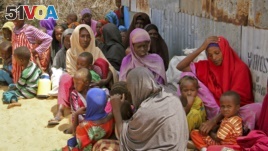 Displaced Somalis who fled the drought in southern Somalia sit in a camp in the capital Mogadishu, Somalia, Feb. 18, 2017.

“Despite the influx of aid that has helped to alleviate famine in some areas of South Sudan, and has so far prevented famine in Yemen and Somalia, the overall food security situation is worsening, and life-threatening hunger continues to spread in both scope and in scale.”

In all four countries, conflict has been the primary driver of humanitarian need. In Somalia, conflict has made it difficult to reach some communities in dire need of food. In South Sudan and Yemen, civil wars have destabilized the economies, crippled agricultural production and trade, and sent the price of food skyrocketing. In Somalia and Nigeria, the regions that have been beset by violent terrorist groups—al Shabaab and Boko Haram and ISIS-West Africa respectively--are among those in the greatest need of humanitarian assistance.

“Through this additional funding, the United States can provide additional emergency food and nutrition assistance, life-saving medical care, improved sanitation, safe drinking water, emergency shelter, hygiene and health programs to treat and prevent disease outbreaks, and protection for civilians who've been affected by conflict, including both those displaced internally and as refugees. This additional funding brings the total U.S. contribution to over $1.8 billion in humanitarian assistance for the four famine crises since the beginning of fiscal year 2017,” said Mr. Jenkins.

“We will continue to work with our international and local partners to provide this life-saving aid needed to avert famine and to support communities impacted by these crises.”