Update Required To play the media you will need to either update your browser to a recent version or update your Flash plugin.
By VOA
Aug 25, 2017


During his recent trip to Colombia, Argentina, Chile, and Panama, Vice President Mike Pence urged governments in the hemisphere to take strong action to support a peaceable solution to the crisis facing the Venezuelan people.

"In Venezuela," said Vice President Pence, "we're seeing the tragedy of tyranny play out before our eyes." The Venezuelan people are "experiencing grinding poverty" and dire food and medicine shortages. 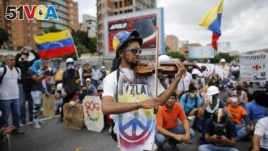 Wuilly Arteaga plays his violin prior clashes with government forces at a march against the government of President Nicolas Maduro in Caracas, Venezuela.

The Maduro regime has undermined Venezuela's democratically-elected National Assembly. It has stifled the voices of a free press and its people, and imprisoned more than 670 political opponents. More than 130 Venezuelans have already died in the fight for democracy.

"The United States, Colombia, and free nations of Latin America will not be silent," as Venezuela slides into dictatorship, said Vice President Pence."We will continue to stand with free nations across our hemisphere until democracy is restored for the Venezuelan people."

Determined to hold Venezuela to account, 12 nations from across the region jointly issued the Lima Declaration. They were blunt and truthful: Venezuela is no longer a democracy. The Maduro regime has committed “systematic violations of human rights and fundamental liberties,” and bears responsibility for blocking the entry into Venezuela of badly needed food supplies and medicine.

The United States has issued several rounds of targeted sanctions against Venezuelan government officials, including Maduro. “The United States,” said Mr. Pence, "will continue to take action until the Maduro regime restores democracy, holds free and fair elections, releases all political prisoners, and ends the repression of the Venezuelan people."

Working with all of its allies across Latin America, President Donald Trump has said, "We can achieve a peaceable solution to the crisis facing the Venezuelan people." To that end, the U.S. will continue to bring to bear the full measure of American economic and diplomatic power until democracy is restored in Venezuela.