UN Concerned About Humanitarian Aid in Yemen, Horn of Africa

Update Required To play the media you will need to either update your browser to a recent version or update your Flash plugin.
By VOA
Aug 21, 2017


Some 20 million people in Yemen, Somalia, South Sudan and north-east Nigeria are on the brink of famine or are already experiencing it, said the United Nations Security Council. Natural disaster is a contributing factor, but much of the problem is man-made or exacerbated by humans. 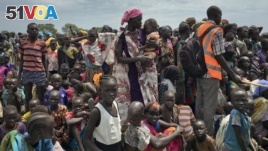 Men, women and children line up to be registered with the World Food Program for food distribution in Old Fangak in South Sudan.

In Yemen, civil war has destabilized the economy, crippled agricultural production and trade, and sent the price of food skyrocketing. 7 million people are in need of emergency food assistance, and another 10 million go hungry more often than not.

Similarly, in Somalia, fighting and violence caused by al-Shabaab militants have grossly exacerbated a humanitarian catastrophe caused by drought.

The situation in all four countries has been aggravated by the refusal of parties to the conflicts to allow humanitarian workers and aid delivery to those in desperate need.