Update Required To play the media you will need to either update your browser to a recent version or update your Flash plugin.
By Alice Bryant
02 August 2020


California State University has approved a vote requiring all students to take an ethnic and social justice studies class in order to graduate.

The decision came in late July from the largest public university system in the United States, commonly known as Cal State.

The change is set to take effect in three years. The decision comes in the middle of a national reckoning over systemic racism and police abuse. It represents the first change to the school's general education program in more than 40 years.

The state Legislature is also considering a bill to require ethnic studies. However, it would not include social justice classes. If passed and signed by California's governor, the measure would overrule the action by California State University. School leaders have denounced this possibility, saying it would interfere with university decision-making.

State lawmakers still have to examine small changes to the bill before it could be sent to Governor Gavin Newsom.

Students at Cal State, for example, can take social justice courses that explore such issues as the criminal justice system and public health inequities.

Chancellor Timothy White is among the leadership at Cal State. Before voting in favor of the class requirement, he said, "It's grounded in ethnic studies, but it is broader, more inclusive, gives students choice."

Lawmaker Shirley Weber is a San Diego Democrat and former professor. She wrote the Legislature's bill. The university's trustees and state lawmakers agree on the need for more ethnic studies. But Weber and supporters of her proposal say permitting social justice classes makes the university's plan weaker. 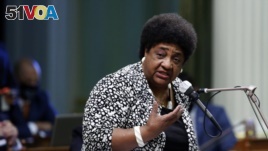 "This is not a requirement for ethnic studies," trustee Silas Abrego said before the vote. He was one of the few members to vote against the Cal State plan. Instead, he favors Weber's bill.

He said the ethnic studies professors were not included in discussions about the proposal.

Weber's bill would take effect in the 2021-2022 school year. It would require students to take a class centered on Native Americans, African Americans, Asian Americans or Latina and Latino Americans.

Tony Thurmond a top official for public education in the state. He is also on the Cal State University board. He voted against the university's proposal. He spoke in favor of the state bill's method that centered on the four ethnic studies subjects.

Weber, who leads the Legislative Black Caucus, has written that her bill was needed because the university was too slow to act. It announced ethnic studies plans almost five years ago.

Weber noted that the California Faculty Association, a labor union, supports her bill. The group represents 29,000 professors at California State University. It has said the aim should be teaching students about the experiences of minorities and people of color in the United States.

Trustee Lateefah Simon called the school's proposal thoughtful and detailed, but she voted against it. She said its "social justice umbrella" plan might cause students to miss out on ethnic studies education.

graduate – v. to earn a degree or diploma from a school, college or university

reckoning – n. the time when your actions are judged as good or bad and you are rewarded or punished

broad – adj. including or involving many things or people

trustee – n. a member of a group that manages the money of an organization

caucus – n. a group of people who meet to discuss a particular issue or to work together for a shared, usually political goal

umbrella – n. something that includes several or many different things