To Mask or Not to Mask? US Divided on How to Reopen Schools

Update Required To play the media you will need to either update your browser to a recent version or update your Flash plugin.
By Caty Weaver
18 July 2020


Schools and educators across the United States are in the middle of a debate over how best to reopen schools.

The U.S. Centers for Disease Control and Prevention released guidelines to assist school systems in reopening safely. The suggestions include face coverings, or masks, and social distancing rules.

Some parents object to both ideas. They want schools to operate just as they did before COVID-19. Others are calling for part-time school and face coverings for everyone.

Kim Sherman is a mother of three in the city of Clovis, California. "Don't tell me my kid has to wear a mask," she said. Sherman said she is conservative and supports President Donald Trump.

Trump, a Republican, has called on schools across the country to fully reopen. He threatened to withhold federal money from school systems that do not return to in-person classes in the fall. He has accused Democrats of wanting to keep schools closed for political, not health, reasons.

Some parents have threatened to withdraw their children from school if masks are required. 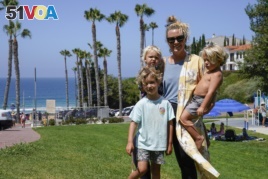 Hillary Salway poses for a photo with her children - Dane Salway, 5, Mick Salway, 1, and Beaux Salway, 3 - on Monday, July 13, 2020, in San Clemente, Calif. Salway plans to send her children back to school in the fall.

Hillary Salway is a mother of three in Orange County, California. She is part of a group calling for schools to fully open with "normal social interaction." If the school system requires masks for her son's kindergarten class, she said, "I don't know if my son will be...in the public school system this fall."

Salway started a petition last month urging the area's school system to "keep facial expressions visually available." And she helped organize a protest of more than 100 people outside the school system's headquarters.

Other parents have expressed similar opinions in Orange County Board of Education meetings. The five-member, elected group supports a full return to school without masks or social distancing. Supporters argue that face coverings are ineffective and give a false sense of security.

'I just want us to take precautions'

Democratic Governor Gavin Newsom, however, has ordered Californians to wear masks in public. The Centers for Disease Control and Prevention says masks may help prevent infected people from spreading the virus to others. It has urged students and teachers to wear them, especially when social distancing is not possible.

Brooke Aston Harper, a parent in Orange County, attended an especially lively school board meeting recently. She described what she heard from some speakers there as "horrifying." She said they were forcing what she called "small worldview" on others.

"I'm not looking for a fight, I just want us to take precautions," said Harper, whose two children are age four and six. She also started a petition. It calls on schools to follow state guidelines that include masks for teachers and students, social distancing rules and other measures.

"For each school board, the question is going to be: What does our community want, and who is the loudest?" she said.

Some parents, educators and doctors argue that there are social, educational and emotional costs to children who do not go to school. They say those costs may be greater than the risk of the virus itself.

The American Academy of Pediatrics has provided guidelines supporting in-person school to avoid social isolation and depression in students. But it said science, not politics, must guide decisions where the coronavirus is spreading.

Texas is a current "hot spot" for COVID-19 infections. Its Republican governor Greg Abbott and Texan education leaders say it is safe to open schools in August. Abbott's government has not released COVID-19 safety guidelines for reopening. It has said masks are a decision for local officials.

Stacey Pugh is a fifth-grade teacher near Houston, Texas. She hopes her school system will order students to wear masks. She said she will wear a mask and a shield - a large, piece of clear hard, plastic that hangs in front of the face. "...I'm even considering getting some type of body covering to wear," she added.

The Texas American Federation of Teachers has demanded guidelines. President Zeph Capo said: "We won't sacrifice our members and students for politics."

"A 10-year-old student might have a 30-year-old teacher, a 50-year-old bus driver, or live with a 70-year-old grandmother. All need to be protected," said Los Angeles schools' chief Austin Beutner. He said public health safety demands the schools avoid becoming infection centers.

Besides masks, the CDC has advised schools to seat students at a safe distance apart in classrooms and eat meals there instead of in larger shared rooms.

Some people in small, rural communities argue they should not have to follow the same rules as people in big cities, where infection rates are higher.

Craig Guensler leads the Wheatland School District, a system of four schools in California's Yuba County. He said that Wheatland already has spent $25,000 on physical barriers for classrooms.

Eighty-five percent of parents who answered a Wheatland opinion study said they want their children in school full time. Officials will space out desks as much as possible. But, they still expect up to 28 students in each classroom, Guensler said.

Jocelyn Gecker reported this story for the Associated Press. Caty Weaver adapted it for Learning English. Mario Ritter, Jr. was the editor.

kindergarten –n. a school or class for children usually from four to six years old

visually –adv. of, relating to, or used in vision

worldview –n. the way someone thinks about the world

precaution –n. something that is done to prevent possible harm or trouble from happening in the future

isolation –n. the state of being in a place or situation that is separate from others : the condition of being isolated

hot spot –n. a place of more than usual interest, activity, or popularity