For Foreign Students, Top Choice in US: USC

Update Required To play the media you will need to either update your browser to a recent version or update your Flash plugin.
By Mike O'Sullivan
2010-5-26 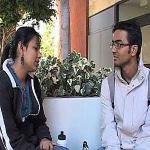 Photo: VOA
At the University of Southern California, one in four graduate students and one in ten undergraduates come from other countries.

The number of international students in the United States is at record levels. Last year, more than six hundred seventy thousand foreign students attended an American college or university.

And for the eighth year the school with the largest number was the University of Southern California in Los Angeles.

U.S.C. has about six thousand six hundred international students in regular academic programs. One in four graduate students and one in ten undergraduates come from other countries.

VINCENT VIGIL: "We are able to have them interact with American students, but then also ask them any sort of simple questions that you may ask another person: 'What do you like to do for fun? Why did you choose U.S.C.? What do you do on the weekends?' Just simple things so that way they get to understand what it means to be an American student."

Sports fans know the University of Southern California for its athletics, but students say they come for the strong academic programs. "Star Wars" director George Lucas got his start at the U.S.C. film school.

The university's ties are strongest with Asia. A Japanese student was in the class of eighteen ninety.

TONY TAMBASCIA: "We currently have students from about one hundred fifteen different places of origin around the world. India is first with over fifteen hundred students. We have almost as many from mainland China."

Yuan Si Zhao, from Beijing, is working on her master's degree in communication management.

YUAN SI ZHAO: "I have lots of friends that came to U.S.C. That is the main reason I wanted to come. And then, one of my family friends actually recommended this school when I was little."

Some students come to study business or liberal arts or to attend the university's highly rated engineering school.

Indian engineering student Rahul Khola says the international student population was part of the school's appeal. California's climate is also appealing. But another engineering student from India, Bikramjeet Singh Grewal, says he does not have time for much fun in the sun.

Foreign students not only give schools more applicants to choose from, they also provide money. Undergraduate students from other countries usually pay full tuition at American colleges and universities. Only a small percentage receive financial aid.

And that's the VOA Special English Education Report, with reporting by Mike O'Sullivan in Los Angeles. Check out our Foreign Student Series for those interested in studying in the United States. Click on the link at 51voa.com. You can also follow us on Facebook, Twitter, YouTube and iTunes at VOA Learning English. I'm Steve Ember.