Update Required To play the media you will need to either update your browser to a recent version or update your Flash plugin.
By Richard Thorman
2011-12-10

STEVE EMBER: And I'm Steve Ember with the VOA Special English program PEOPLE IN AMERICA. Today we tell about the life of Nineteenth Century philosopher and writer Ralph Waldo Emerson.

SHIRLEY GRIFFITH: The United States had won its independence from Britain just twenty-two years before Ralph Waldo Emerson was born. But it had yet to win its cultural independence. It still took its traditions from other countries, mostly from western Europe.

What the American Revolution did for the nation's politics, Emerson did for its culture.

When he began writing and speaking in the eighteen thirties, conservatives saw him as radical -- wild and dangerous. But to the young, he spoke words of self-dependence -- a new language of freedom. He was the first to bring them a truly American spirit.

He told America to demand its own laws and churches and works. It is through his own works that we shall look at Ralph Waldo Emerson.

STEVE EMBER: Ralph Waldo Emerson's life was not as exciting as the lives of some other American writers -- Herman Melville, Mark Twain or Ernest Hemingway. Emerson traveled to Europe several times. And he made speeches at a number of places in the United States. But, except for those trips, he lived all his life in the small town of Concord, Massachusetts.

He once said that the shortest books are those about the lives of people with great minds. Emerson was not speaking about himself. Yet his own life proves the thought.

SHIRLEY GRIFFITH: Emerson was born in the northeastern city of Boston, Massachusetts, in eighteen oh three. Boston was then the capital of learning in the United States. 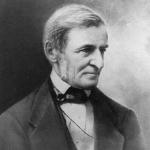 Emerson's father, like many of the men in his family, was a minister of a Christian church. When Emerson was eleven years old, his father died. Missus Emerson was left with very little money to raise her five sons.

After several more years in Boston, the family moved to the nearby town of Concord. There they joined Emerson's aunt, Mary Moody Emerson.

STEVE EMBER: Emerson seemed to accept the life his mother and aunt wanted for him. As a boy, he attended Boston Latin School. Then he studied at Harvard University.

For a few years, he taught in a girls' school started by one of his brothers. But he did not enjoy this kind of teaching. For a time, he wondered what he should do with his life. Finally, like his father, he became a religious minister. But he had questions about his beliefs and the purpose of his life.

SHIRLEY GRIFFITH: In eighteen thirty-one, Ralph Waldo Emerson resigned as the minister of his church because of a minor religious issue. What really troubled him was something else.

It was his growing belief that a person could find God without the help of an organized church. He believed that God is not found in systems and words, but in the minds of people. He said that God in us worships God.

Emerson traveled to Europe the following year. He talked about his ideas with the best-known European writers and thinkers of his time. When he returned to the United States, he married and settled in Concord. Then he began his life as a writer and speaker.

STEVE EMBER: Ralph Waldo Emerson published his first book, Nature, in Eighteen thirty-six. It made conservatives see him as a revolutionary. But students at Harvard University liked the book and invited him to speak to them. Emerson's study room at his home in Concord, Massachusetts

SHIRLEY GRIFFITH: "Give me an understanding of today's world," he told them, "and you may have the worlds of the past and the future. Show me where God is hidden...as always...in nature. What is near explains what is far. A drop of water is a small ocean. Each of us is a part of all of nature."

Emerson said a sign of the times was the new importance given to each person. "The world," he said, "is nothing. The person is all. In yourself is the law of all nature."

Emerson urged students to learn directly from life. He told them, "Life is our dictionary."

STEVE EMBER: The following year, Emerson was invited to speak to students and teachers at the Harvard religious school. In his speech, he called for moral and spiritual rebirth. But his words shocked members of Harvard's traditional Christian church. He said churches treated religion as if God were dead.

Church members who heard him speak called him a man who did not believe in God. Almost thirty years passed before Harvard invited Emerson to speak there again.

SHIRLEY GRIFFITH: Away from Harvard, Emerson's speeches became more and more popular. He was able to make his living by writing and speaking. "Do you understand Mister Emerson?" a Boston woman asked her servant. "Not a word," the servant answered. "But I like to go and see him speak. He stands up there and looks as if he thought everyone was as good as he was."

Many people, especially the young, did understand Emerson. His ideas seemed right for a new country just beginning to enjoy its independence -- a country expanding in all directions.

Young people agreed with Emerson that a person had the power within himself to succeed at whatever he tried. The important truth seemed to be not what had been done, but what might be done.

STEVE EMBER: In a speech called "Self-Reliance" Ralph Waldo Emerson told his listeners, "Believe your own thoughts, believe that what is true for you in your private heart is true for all men."

Emerson said society urges us to act carefully. This, he said, restricts our freedom of action. "It is always easy to agree," he said. "Yet nothing is more holy than the independence of your own mind. Let a person know his own value. Have no regrets. Nothing can bring you peace but yourselves."

SHIRLEY GRIFFITH: The eighteen fifties were not a peaceful time for America. The nation was divided by a bitter argument about slavery. 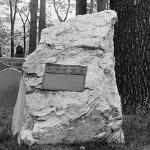 Emerson was not interested in debates or disputes. But he was prepared to defend truth, as he saw it.

Emerson believed that the slaves should be freed. But he did not take an active part in the anti-slavery movement. All his beliefs about the individual opposed the idea of group action -- even group action against slavery.

As the dispute became more intense, however, Emerson finally, quietly, added his voice to the anti-slavery campaign. When one of his children wrote a school report about building a house, he said no one should build a house without a place to hide runaway slaves.

STEVE EMBER: Emerson's health began to fail in the early eighteen seventies. His house was partly destroyed by fire. He and his wife escaped. But the shock was great. Friends gave him money to travel to Egypt with his daughter. While he was gone, they rebuilt his house.

Emerson returned to Concord. But his health did not improve. He could no longer work. In April, eighteen eighty-two, he became sick with pneumonia. He died on April twenty-seventh. He was seventy-nine years old.

SHIRLEY GRIFFITH: Ralph Waldo Emerson's death was national news. In Concord and other places, people hung black cloth on houses and public buildings as a sign of mourning. His friends in Concord walked to the church for his funeral service. They carried branches of the pine trees that Emerson loved.

After the funeral, Ralph Waldo Emerson was buried in Concord near the graves of two other important early American writers -- Henry David Thoreau and Nathaniel Hawthorne.

SHIRLEY GRIFFITH: And I'm Shirley Griffith. Join us again next week for another People in America program on the Voice of America.