Update Required To play the media you will need to either update your browser to a recent version or update your Flash plugin.
By Susan Shand
23 March 2020


The containers of tulip flowers in storage at Henk van der Slot's farm in The Netherlands were supposed to go to Vatican City. The Roman Catholic Church planned to use them to help celebrate the Easter holiday on April 12.

But travel and transport restrictions forced a change of plans. The church will go without the famed Dutch flowers this year.

The church is not alone in that. 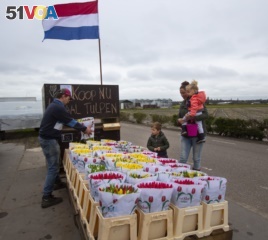 Frans van der Slot, left, puts tulips for sale on a stand outside his farm in Lisse, near Amsterdam, Netherlands, Thursday, March 19, 2020.

"The coronavirus is a disaster for the Dutch flower industry," said Michel van Schie. He is the press officer at Royal FloraHolland, a group of growers that sells some 12 billion plants and flowers each year.

But, van Schie said 85 percent of the market turnover has disappeared.

That is a big problem for the industry. Last year, Dutch flower exports brought in more than 6 billion euros. The Dutch government says the country has a 44 percent share of world trade in flowers and plants.

Some Dutch farmers are now giving away tulips to health care workers as a way to thank them for helping fight COVID-19.

It is not only growers in The Netherlands who are hurting. The pain has spread to farmers in Europe and Africa.

In Kenya, few people are at work at Maridadi Flowers, a farm about 90 kilometers north of Nairobi. Normally, 120 people are busy at work in the company's product quality control area. But it is almost empty now. The few employees there are cutting down roses and throwing them away --- about 230,000 to 250,000 flowers each day.

Owner Jack Kneppers is a Dutchman who has worked in Kenya for many years. He said about 80 percent of his 720 employees are at home.

"This is costing us about half a million dollars a month," Kneppers said. He said he will start to dismiss employees if the situation continues much longer.

At Royal FloraHolland's large auction, few flowers are being traded.

The auction was the point of sale for about 4.7 billion Euros worth of flowers last year. Now it is asking farmers to send only about 25 percent of their usual crops.

Frans van der Slot is keeping his tulips in cold storage for as long as possible. He is hoping sales will recover around Easter on April 12, but if he is wrong, he will have to throw out his flowers.

Earlier this week, he threw out a lot of tulip bulbs because it would not be economical to plant them.

"They fed them to cows," he said. "They were first-class bulbs."

The coronavirus crisis could not have hit at a worst time in the Netherlands.

In the middle of spring, fields around the country are filled with color as tulips and other flowers bloom.

Kneppers says the business situation is the worst he has ever seen.

One of his workers, Carol Gikundi is worried. She has three children and her mother to provide for.

"We are scared for our jobs," she said.

In the Netherlands, Frans van der Slot has set up a little store outside his farm to sell flowers he cannot send to auction.

Fifty flowers cost 5 euros ($5.40), much less than they sell for in stores and markets across the Netherlands.

He said he has no choice. If his business fails, Van der Slot said, "I lose all my savings."

auction - n. a place where people compete to pay a high price for items they really want

bulb - n. the rounded, underground part of a plant that grows into a new plant

bloom - v. when a plant flowers

scared – adj. having a fear of something