Update Required To play the media you will need to either update your browser to a recent version or update your Flash plugin.
By Dan Friedell
01 April, 2016


It is professional baseball season once again in America.

You may remember that in November, the Kansas City Royals won their first championship in over 30 years. They defeated the New York Mets in the 111th World Series. 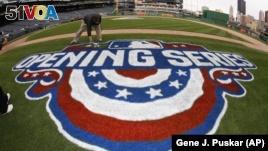 Sunday is opening day for the 2016 baseball season. Six teams will play in three games.

The Royals and the Mets will face each other again in one of those openers.

The teams that made it into the playoffs in 2015 are expected to do well again this year. The Chicago Cubs and the Los Angeles Dodgers are among them.

The experts study new players, and team changes and game schedules to try to predict which teams will be the winners and losers. But there are almost always surprises on the field.

For example, the Royals were not expected to be serious competition in 2014, but the team made it all the way to the World Series. They lost that year to the San Francisco Giants.

Not too long ago, the Colorado Rockies also got to the World Series even though the team did not win many games early in the season.

Baseball teams play 162 games from April until early October. Players can get injured, traded and experience slumps. It is a long, unpredictable season. Some people say that is what makes the game fun.

How will Major League Baseball handle the U.S. government's decision to engage Cuba?

There are some stories that will be good to follow during the 2016 season.

Some of the best players currently in Major League Baseball are from Cuba or have Cuban roots. Cuban Yoenis Cespedes was traded from the Detroit Tigers to the New York Mets last summer. He was the Mets' most important players as they moved up in the standings, made the playoffs and ultimately went to the World Series.

Jose Fernandez grew up in Cuba, but his family defected in 2007, when he was a teenager. Fernandez went to high school in Florida. In 2013, he was named the National League Rookie of the Year. That means he was the league's best new player. 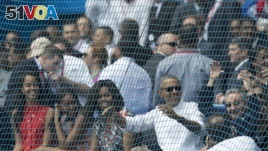 Cuban President Raul Castro, right, cheers next to U.S. President Barack Obama, his wife Michelle, and their daughters Sasha and Malia, at the start of a baseball game between the Tampa Bay Rays and the Cuban national baseball team, in Havana, Cuba, Tuesd

The game was seen as a symbol of decreasing tensions between the United States and Cuba. If the two countries could play a baseball game together, perhaps they could work together to resolve their differences.

There will probably be some negotiations in the future between the two governments and Major League Baseball. Officials will consider whether Cuban baseball players will be able work in the U.S. in the future without defecting.

President Obama says Cuban people should be able to work for American companies in in Cuba without sacrificing their citizenship. In the past, the only way players from Cuba could make it to Major League Baseball was by escaping from their homeland.

In July, the U.S. and Cuba established diplomatic relations. The U.S. eased restrictions against Cuba.

The first two Cuban baseball players expected to take advantage of the closer ties are brothers Yulieski and Lourdes Gourriel. The brothers left the Cuban National Team earlier this year during a tournament in the Dominican Republic.

Baseball is one of the oldest sports in the U.S. There is debate about exactly when the first baseball game was played. But historians agree it happened before 1900.

Baseball has a lot of traditions, like most sports. These traditions include unwritten rules of behavior. For example, newer players are expected to show respect to more experienced players.

A home run is when a player hits the ball so far he can travel around all four bases in one trip. He scores as a result. And the home run also means that anyone already on base scores also.

In recent years, some young players have wildly celebrated their home runs. They might throw their arms in the air or dramatically throw their bat to the ground.

Bryce Harper, of the Washington Nationals, is one of the best young players in baseball. Harper recently told ESPN the Magazine that he is tired of hearing older players complain about the young. He is only 23, but has played in the Major Leagues for four seasons. 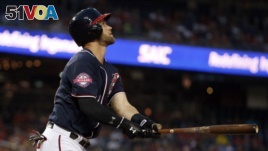 He said, "There's so many guys in the game now who are so much fun."

He said he thinks it is too bad those players are restricted by the unwritten rules about behavior on the field.

What will new technology teach us about baseball this year?

Baseball is one of the oldest sports in the U.S. But it is modern in its use of new technology. The technology helps people understand how players do their jobs.

For example, a system called PITCHf/x has been in every major league stadium since 2006. The system tracks and records the path of a pitch and its speed.

Another system uses radar and cameras to track how the ball moves after it is hit. It also records the movement of defensive players on the field.

In 2015, the system showed that the hardest hits in baseball travel over 160 kilometers per hour.

The fastest runners are only a little slower than Olympic running champion Usain Bolt. In other words, some players are very fast runners.

The system also shows how far some players run to catch balls and how quickly they react to batted balls.

Some players ran more than 17 meters in under two seconds to catch a ball. Other players showed they could throw the ball over 150 kilometers per hour.

A report on MLB.com explains that some teams are using this information to provide better treatment to their players and to compare players and teams.

Are you excited for the baseball season? Write to us in the Comments Section or on 51VOA.COM.

complain – v. to say that you do not like something

slump – n. a period of time when a team or player is doing poorly

defect – v. to leave a country, political party, organization and go to a different one

rookie – n. a first-year player in a professional sport

playoffs – n. a series of games that is played after the end of the normal season in order to decide which player or team is the champion — usually plural