Update Required To play the media you will need to either update your browser to a recent version or update your Flash plugin.
By Mario Ritter, Jr
24 January 2023


California, the most populous state in the United States, has experienced three deadly mass shootings in just eight days.

On Monday, police arrested a suspect in the shooting deaths of seven people in Half Moon Bay, California. The incident came just two days after a Lunar New Year attack in Monterey Park that killed 11 people. And on Jan. 16, a young mother and her baby were among six people killed in a shooting at a home in California's Central Valley.

Police identified the gunman in Half Moon Bay as 67-year-old Chunli Zhao. San Mateo County Sheriff Christina Corpus said officers found him in his car at a sheriff's substation. 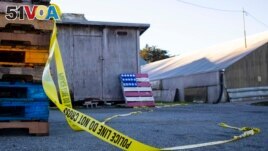 Police tape marks off the scene of a shooting off Cabrillo Highway, Jan. 24, 2023, after a gunman killed several people at two agricultural businesses in Half Moon Bay, California. (AP Photo/ Aaron Kehoe)

A total of seven bodies were found in two places. Another person was found injured at a farm several kilometers away from the other shooting. Officials believe Zhao worked at one of the places where victims were found.

Officials do not know why he carried out the shooting. But Reuters reports Corpus as saying that he is "fully cooperating" with the investigation. The sheriff's department believes Zhao acted alone.

Half Moon Bay is a coastal farming town about 48 kilometers south of San Francisco. About 12,000 people, mostly white, live in the area that is known for growing flowers and vegetables.

Half Moon Bay Vice Mayor Joaquin Jimenez said those killed included Chinese and Latin American farm workers. One official said some of the workers lived at the farming facilities and children may have witnessed the shooting.

A video of the arrest shows three officers approaching the parked car with their weapons prepared to fire. Zhao got out of his car and the police pulled him to the ground. Officers then handcuffed him and led him away.

California Governor Gavin Newsom said on the social media service Twitter that he was visiting people injured in the Monterey Park shooting when he was told of the shooting at Half Moon Bay. "Tragedy upon Tragedy," he tweeted.

At this time, law enforcement officials are still learning more about the deadly shooting in Monterey Park, a majority Asian-American community near Los Angeles. The gunman, Huu Can Tran, shot himself after killing 11 people at a dance studio.

"For the second time in recent days, California communities are mourning the loss of loved ones in a senseless act of gun violence," U.S. President Joe Biden said Tuesday morning. "Even as we await further details on these shootings, we know the scourge of gun violence across America requires stronger action," Biden said.

The Associated Press reported that in less than three weeks of the new year, the U.S. has experienced six mass killings with 39 deaths. The information comes from a database kept by the AP, USA Today and Northeastern University. The database tracks every mass killing — defined as four dead, not including the offender — committed in the U.S. since 2006.