UN: Hundreds of Rohingya Refugees Lost at Sea in 2022

Update Required To play the media you will need to either update your browser to a recent version or update your Flash plugin.
By
18 January 2023


The United Nations refugee agency has reported a big rise in the number of Rohingya refugees who died at sea in 2022.

The U.N. refugee agency (UNHCR) said at least 348 people died or disappeared while trying to flee Myanmar or Bangladesh by boat.

The agency said more than 3,500 Rohingya tried sea crossings in the Bay of Bengal or the Andaman Sea last year. That is five times more than the year before. 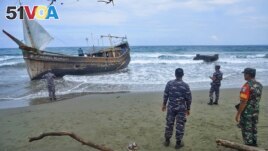 UNHCR spokeswoman Shabia Mantoo said the big increase suggests there is despair among the population of refugees.

Mantoo said: "We are hearing reports...from Rohingya about this growing sense of desperation and anxiety about the future." She added that many are being exploited by human traffickers who give false promises and false hope. She said most of the 39 boats making the sea crossings last year left Myanmar and Bangladesh.

In the last two months of 2022, the UNHCR said 450 Rohingya arrived in Aceh, Indonesia. Another boat carrying 100 people disembarked in Sri Lanka. A boat carrying 180 Rohingya Muslims is feared to have sunk in December.

The UNHCR said it had called on maritime officials in the area to rescue people at sea. But those requests had been ignored and boats have been at sea for weeks.

In August 2017, more than 750,000 Rohingya Muslims who faced violence and persecution in Myanmar fled to Cox's Bazaar in Bangladesh. They have been living in overcrowded camps with other refugees since then.

The UNHCR says conditions in Myanmar have not improved and it remains unsafe for the Rohingya to return. The group is barred from receiving citizenship.

exploit –v. to use someone in an unfair or cruel way—n.

desperation –n. a strong feeling of sadness and loss of hope

anxiety –n. a feeling of tension and nervousness

disembark –v. to leave a boat or to get off of a boat, plane or other means of transportation