Update Required To play the media you will need to either update your browser to a recent version or update your Flash plugin.
By VOA
17 April, 2016


The novelist Ernest Hemingway wrote 47 possible endings to his book "A Farewell to Arms." Eight of them are part of a new show at the John F. Kennedy Presidential Library in Boston, Massachusetts. The ending that Hemingway finally chose is also there to see.

Patrick Hemingway is the writer's only surviving child. This week, he visited the library show. He said the exhibit shows how hard his father worked.

He said, "He always felt responsible for being where the action was. A lot of writers just retire to their rooms and describe their childhood. He didn't do that."

The Kennedy Library holds the world's largest collection of documents, photographs and personal belongings of the famous writer. Library Curator Stacey Bredhoff describes the Hemingway collection as one of the library's "greatest treasures."

Hemingway and Kennedy never met. However, Kennedy liked the writer's work. Kennedy wrote to Hemingway for permission to use the novelist's expression "grace under pressure." Hemingway was too sick to accept an invitation to Kennedy's inauguration in January of 1961. The writer killed himself later that year.

The show also includes Hemingway's first short story. It was published in 1917 in a high school magazine. Visitors can also see letters between Hemingway and other writers at the time.

Patrick Hemingway praised the show. "I am very pleased that they were able to put together in my lifetime a very comprehensive picture of a person who really represented very well the first half of the 20th century,'' he said. 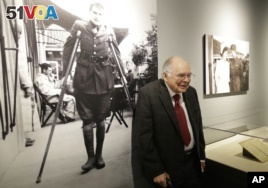 Ernest Hemingway fled Finca Vigia, his home in Cuba, at the time of Fidel Castro's revolution. The writer left much of all he owned on the island.

After the writer died, President Kennedy sought Cuba's permission for Hemingway's wife, Mary, to visit the island and collect the belongings. A fishing boat transported the property from Havana to Florida.

Mary Hemingway established a relationship with Kennedy's wife, Jacqueline, after President Kennedy was murdered in 1963. They later decided to keep the writer's Cuba collection at the Kennedy library.

Patrick Hemingway now lives in Bozeman, Montana. But he is represented in the show. A photograph shows him and his father on a deep sea fishing boat. Fishing was one of Ernest Hemingway's great loves.

"He worked very hard in the morning but he never worked in the afternoon. He had a great life,'' Patrick Hemingway said of his father.

Caty Weaver adapted this story from the Associated Press report. We want to hear from you. Post your message in the Comments Section or on 51voa.com.

curator – n. a person who is in charge of the things in a museum, zoo, etc

grace – n. a controlled, polite, and pleasant way of behaving

draft ­– n. a version of something (such as a document) that you make before you make the final version

stationery ­– n. paper that is used for writing letters and that usually has matching envelopes