Mars: How Will Humans Get There?

Update Required To play the media you will need to either update your browser to a recent version or update your Flash plugin.
By Anne Ball
30 October, 2016


Mars—how to get there and maybe even live there— has been in the news a lot lately.

Governments and private industry around the world are discussing ways to get people to the so-called "Red Planet."

In mid-October, U.S. President Barack Obama attended a science and technology conference in Pittsburgh, Pennsylvania. He spoke of his love of the subject.

President Barack Obama sits in a flight simulator during a tour of projects at the White House Frontiers Conference at University of Pittsburgh in Pittsburgh, Oct. 13, 2016, as NASA astronaut Dr. Serena Aunon-Chancellor, left, watches.

"I'm a science geek," Obama said. "I don't make any apologies for it."

The president got laughter from a roomful of fellow science geeks.

Obama first proposed a U.S. mission to Mars in 2010. He repeated his call this month to get humans to and from the Red Planet by the 2030s. Obama called for a partnership with private companies to develop a way to make it happen.

In Pittsburgh, Obama examined a Boeing space flight simulator—a device that recreates what it would be like to fly in space. He also saw a SpaceX Dragon Spacecraft—the kind that carries cargo to the International Space Station.

The SpaceX Dragon spacecraft is part of ongoing research efforts to develop vehicles that could transport astronauts to the Red Planet.

At the conference, the White House announced it is giving about $300 million to research and development-- including money for the deep-space exploration project that supports the president's Mars-related goals.

"Fly me to the moon, let me play among the stars. Let me see what spring is like on Jupiter and Mars..."

Some scientists believe that the words of this popular Frank Sinatra song may come true one day. They want to return to the moon as a first step to exploring Mars.

Some scientists question whether a trip to Mars is possible without huge amounts of money from the government. Paul Spudis is with the Lunar and Planetary Institute in Houston, Texas.

Spudis wrote a book called "The Value of the Moon." In it, he argues for establishing an outpost on the moon. It takes only three days to get there, and three to come back.

He says NASA missions have shown that there is water at the moon's poles.

"So, I have energy and I have materials. I can live on the moon. I can make rocket propellant."

Scientists and space experts gathered recently at Rice University in Houston, Texas, for the "Lost in Space 2016" conference. Former NASA astronaut Leroy Chiao attended the meeting. He supports returning to the moon.

Michael Lembeck is president of CEPStone. He supports using the moon as a training base. But he questions the idea some scientists have of using it as a chemical refueling station.

"If we talk about actually making the journey to Mars on chemical propulsion, that could be a dead end. We need high-speed transportation."

That is something private industry is already developing. Elon Musk is founder of SpaceX. His company is working on designing transportation to Mars. 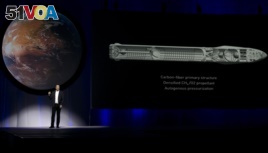 SpaceX founder Elon Musk tells the 67th International Astronautical Congress in Guadalajara, Mexico, that he sees 1,000 passenger ships flying together to Mars and says it could become reality within a century, Sept. 27, 2016.

He used the social news site Reddit earlier this month to explain his plans to colonize Mars. People asked him about his plan to send up to one million people to the Red Planet sometime in the next 40 to 100 years.

Musk said the plan would begin with unmanned cargo missions. These missions would teach future crews how to land as well as the best way get water needed to make methane fuel.

An unmanned ship would also be sent to Mars with equipment to build a plant to create refueling propellant for return trips to Earth. Musk said the first manned crew would have the job of constructing the plant.

He has said that SpaceX is already working on equipment for the project.

Musk also said his company will have actual models of the habitation, or living sections, "maybe in a year or two."

Musk's plans also include 1,000 passenger ships flying all together to Mars. But much of the technology needed for the Interplanetary Transport System—the system to get people there—has not yet been developed.

The recent crash of the European Space Agency probe as it landed on Mars shows how difficult it is to successfully get to, and land on, the planet.

ExoMars Flight Operations Director Michel Denis said, "This didn't land softly as we would have like to."

The probe hit the ground traveling much faster than it should have, he said.

NASA's Mars Reconnaissance Orbiter, which is circling around the planet, took a picture of the crash site.

The ExoMars program is a joint effort with Russia. The program aims to determine if there is life on the planet.

China is also working on its own mission to Mars. The country plans to land a rover vehicle on Mars by 2020.

Anne Ball wrote this story for Learning English with reports from VOA's Greg Flakus, Marissa Melton and Reuters News Service. Ashley Thompson was the editor. We want to hear from you. Write to us in the Comments Section and visit us on 51VOA.COM.

geek – n. a person who is very interested in and knows a lot about a particular field or activity

simulator – n. a machine that is used to show what something looks or feels like and is usually sued to study something or to train people

outpost – n. a small military base or town far away from other towns

rookies - n. a person who has just started a job or activity, a beginner

colonize - v. to establish a place occupied by humans

probe – n. a thin, long instrument that is used especially for examining