Update Required To play the media you will need to either update your browser to a recent version or update your Flash plugin.
By VOA
23 December, 2015


Muslims risked their lives to protect Christians against militant gunmen on a bus in Kenya on Monday.

The gunmen boarded a crowded bus in Mandera and demanded that Muslim passengers leave the bus. That would have left the Christian travelers behind.

But the Muslim passengers refused. Some gave Christian women passengers their hijabs, or head coverings, CNN reported. They helped others hide behind bags.

Two people were killed in the attack. But more would have died if the Muslim passengers had obeyed the militants' order and left the Christian passengers behind on the bus. 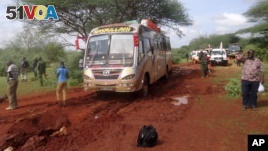 Kenyan security forces gather around the scene on an attack on a bus about 50 kilometers outside the town of Mandera on Nov. 22, 2014. There was another bus attack on Monday. (AP)

CNN quoted passenger Abdqafar Teno saying: "They told them (the militants) ‘If you want to kill us, then kill us. There are no Christians here.'"

BBC reported that some Muslim passengers told the attackers "to kill them together or leave them alone."

Authorities said the gunmen left the bus after the passengers refused to separate based on religion.

Some passengers warned that police were following the bus, Kenya's Standard newspaper reported. But that was not true. The police car assigned to protect the bus had broken down, Kenyan officials said.

One hundred passengers, mostly women, were on the bus at the time of the attack, according to Kenyan officials.

Kenyan officials praised the courage of the passengers.

"We are all Kenyans, we are not separated by religion," said Joseph Nkaissery, Kenya's Interior Cabinet Secretary.

Terrorism has been a major problem in the area.

Al-Shabab claimed responsibility for Monday's attack. It has tried to turn Somalia into a fundamentalist Islamic state. Al-Shabab has launched attacks in Kenya after Kenyan forces went to Somalia to fight the militants.

Last April, al-Shabab militants killed 148 people in an attack on Garissa University College. In that attack, the militants killed Christians, while sparing many Muslims. The college is expected to reopen in January.

In 2014, a bus was attacked near Mandera by al-Shabab militants. Twenty eight non-Muslims were killed in that attack.

These terrorist attacks and others have led 2,000 foreign teachers and many non-Muslim health workers to leave the area, according to BBC. The area where Monday's attack took place is near the border with Somalia, al-Shabab's home base.

BBC said the passengers who refused to tell their religions showed courage. But they also might have acted out of frustration, BBC said.

While the terrorist attacks have targeted non-Muslims, many Muslims have been hurt by the departure of foreign teachers and health workers, BBC said.

According to government officials, the bus targeted in Monday's attack was traveling from the Kenyan capital of Nairobi to Mandera. Mandera is near the border with Somalia and Ethiopia.

The buses generally travel with a police escort because of the threat of terrorist attacks.

But the police car assigned to protect the bus broke down, according to Nkaissery, Kenya's Interior Cabinet secretary.

He said that the bus driver continued on the trip without police protection.

Bruce Alpert adapted this story from VOA News for Learning English. Kathleen Struck was the editor.

assign – v. to give someone a particular job or duty

fundamentalist – n. a person who strictly and literally follows a set of rules and laws especially about religion

courage – n. the ability to do something that you know is difficult or dangerous

frustration – n. a feeling of anger or annoyance caused by being unable to do something

departure – n. the act of leaving a place especially to start a journey

generally – adv. in a way that is not detailed or specific