Update Required To play the media you will need to either update your browser to a recent version or update your Flash plugin.
By Moki Edwin Kindzeka
20 December, 2015


African refugees continue to be forced from their homes as they escape the terror of Boko Haram militants.

As Nigerians and Cameroonians settle into a refugee camp in Cameroon, they are telling their stories to United Nations workers.

Abubakar Salifou, 62, escaped with his wife and four children from Nigeria. He said men with weapons looted cattle and stores right before Nigerian and Cameroonian soldiers arrived. He said soldiers carried out raids on suspected Boko Haram strongholds. 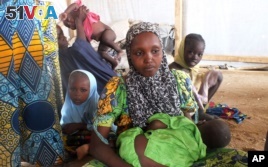 A family of refugees that fled their homes due to violence from the Islamic extremist group Boko Haram sit inside a refugee camp in Minawao, Cameroon, Feb. 25, 2015.

The attacks by Boko Haram against Nigeria have entered Cameroon, Chad and Niger. Boko Haram has destroyed villages and killed residents. An estimated 20,000 have been killed. More than 2 million have been displaced, according to U.N. figures.

Cameroon's Minister of Youth Affairs and Civic Education said 800 people arrive every week in the northern refugee camp. The camp has a population of more than 55,000 people. About 50 babies are born in the camp each month.

Michael Hoza, U.S. Ambassador to Cameroon, visited the northern Cameroon camp. He said the main goal is to defeat Boko Haram. That way, the displaced can return to their homes.

"We [hope to] restore the economy," Hoza said. "People can get back to doing what they are supposed to be doing, which is raising their families and building a bright future."

People in the camp say sanitation, healthcare and healthy food are among their top needs.

What do you think about the refugee problem in Africa? We want to hear from you. Write to us in the Comments Section or visit our 51VOA.COM.

loot – v. something that is stolen or taken by force

sanitation – n. the process of keeping places free from dirt, infection and disease, by removing waste, trash and garbage and by cleaning streets