Update Required To play the media you will need to either update your browser to a recent version or update your Flash plugin.
By Dan Novak
15 July 2022


The United States' ongoing labor shortage is bad for employers. But it also presents a chance for workers who often had a hard time finding jobs in better economic times: former prisoners.

Special training programs in Mississippi and other states are now trying to fill some of the 11.3 million open jobs in the U.S. by hiring former inmates.

Antonio McGowan was a prisoner at the Mississippi State Penitentiary. After serving 17 years, he was free for the first time since he was 15. But as an adult finally out of prison, he could only find low-paying jobs. 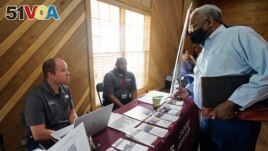 McGowan needed stable work, but all he could find were temporary jobs. He cut grass one week and painted a house the next. He could not find full-time employment and he found it hard to get a stable paycheck. Many of his bills started going unpaid.

"Things weren't in place," McGowan said. "They weren't where I wanted them to be as far as being an individual back in society."

After several years, McGowan entered the Hinds County Reentry Program, a job-training program in Mississippi for former inmates created in October. The practice of employing people with a criminal record is known as "second-chance hiring."

In better economic times, many former prisoners faced serious difficulties in finding work. But the labor shortage created by the COVID-19 pandemic now presents them with opportunities, said Eric Beamon. He works for MagCor, a company that provides job training to people in Mississippi prisons.

Some studies have shown that stable jobs are a major factor in reducing recidivism. Recidivism is when someone returns to prison after being released.

Still, not everyone is willing to hire a former prisoner. Stephanie Ferguson is an employment policy expert at the U.S. Chamber of Commerce. She wrote in a May report that a lack of job opportunities for those with criminal records is hurting workforce participation in the economy.

The National Conference of State Legislatures found that barriers to work that felons face were connected to a loss of at least 1.7 million employees from the economy. It also cost the economy at least $78 billion in 2014. That is the year McGowan left prison.

But the work shortage could create a change. And programs like Hinds County Reentry and MagCor can help by training former prisoners to reenter society. The programs also connect them with jobs that match their skills and interests.

McGowan said he would like to work in air conditioning and heating repair. The program's workers recommended him to Upchurch Services, a Mississippi-based company that permits workers to take classes in repair services while getting experience in the job. McGowan was hired the second week of May.

He makes $15 an hour and works 40 hours each week. He has full health care coverage. And, he said, he loves the work.

In addition to skills training, the workforce reentry programs can provide former inmates with mentors who can help them with life after prison. A mentor is someone who teaches or gives help to a less experienced person.

Savannah Hayden was released from prison in November. Her mentor is Cynetra Freeman. Freeman is the founder of the Mississippi Center for Reentry. The organization offers work-training programs to inmates preparing to leave prison.

Freeman remembers going to an employment agency the day after she was released from prison. She said the agency told her she would never get a job because of her criminal record.

Hayden thought she might work temporary jobs and try to make enough money. But Freeman told her to use her experience as a former inmate to help others reentering society. Hayden now works for Freeman as the mental health and drug addiction coordinator at the Center for Reentry.

"After so many doors are slammed in your face, you get tired of asking," Hayden said. "But there will be a person who says ‘yes,' and that will change your life."

inmate — n. a person who is kept in a prison or mental hospital

stable — adj. in a good state or condition that is not easily changed or likely to change

hire — v. to give work or a job to in exchange for wages or a salary

participation — n. to be involved with others in doing something

coordinator — n. a person who organizes people or groups so that they work together properly and well

slam — v. to close in a forceful way that makes a loud noise