Update Required To play the media you will need to either update your browser to a recent version or update your Flash plugin.
By Jonathan Evans
21 November 2021


There is new hope for the future of a population of endangered butterflies in the American state of California. Last year, a count of the orange-and-black Western monarchs reached a record low of about 1,900.

But this year, butterfly counters are reporting tens of thousands more Western monarchs. The insects live along California's central coast in winter.

The non-profit science group Xerces Society for Invertebrate Conservation carries out the official study every year. It just opened the first period of this year's count on November 13. But it says early reports are positive. 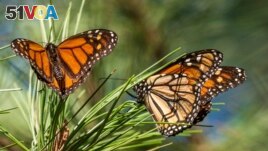 Sarina Jepsen is director of Endangered Species at Xerces Society. She says volunteer counters have reported the presence of as many as 50,000 monarchs in the last few weeks.

Jepsen says the finding is "...not a recovery, but we're really optimistic and just really glad that there are monarchs here and that gives us a bit of time to work toward recovery of the Western monarch migration."

In the 1980s, millions of Western monarchs gathered in trees from northern California down to western Mexico. Now, their wintering sites are mostly on California's central coast.

Western monarch butterflies travel south from the Pacific Northwest to California each winter. They return to the same places and even the same trees, where they gather. The monarchs usually arrive in California at the beginning of November. They spread across the country once warmer weather arrives in March.

The Western monarch butterfly population has decreased by more than 99 percent since the 1980s.

Monarchs from across the West migrate yearly to about 100 wintering sites along central California's Pacific coast. One of the best-known wintering places is the Monarch Grove Sanctuary in the city of Pacific Grove.

Pacific Grove, California, known as "Butterfly Town, USA," has worked for years to help the decreasing monarch population. The city holds a parade to celebrate the butterflies every October. It also bans human interference with the monarchs. The crime carries a $1,000 fine.

Last year, no monarchs appeared in Pacific Grove. But this year, an early count found that more than 13,000 of the insects had moved in.

Scientists do not know why the population increased this year. But Jepsen said it is likely a combination of reasons, including better conditions on their breeding grounds.

Monarch butterflies lack state and federal legal protection that could keep their territory from being destroyed. Last year, the butterflies were denied federal protection. But the insects are now among the candidates for listing under the federal Endangered Species Act.

Haven Daley and Olga R. Rodriguez reported on this story for the Associated Press. Jonathan Evans adapted this story for Learning English. Caty Weaver was the editor.

optimistic – adj. having or showing hope for the future : expecting good things to happen

breeding – n. the process by which young animals, birds, etc., are produced by their parents