Update Required To play the media you will need to either update your browser to a recent version or update your Flash plugin.
By Dan Friedell
08 August, 2016

There have already been a lot of "firsts" to celebrate at the 2016 Summer Olympics.

Team USA won the first gold medal of the Games on Saturday. Ginny Thrasher won the gold medal in the women's 10-meter air rifle competition early in the day. She finished 1 point ahead of Du Li, the silver medalist from China.

It is the 19-year-old's first Olympic Games. She entered her first shooting competition just five years ago.

Here is another first. Majilinda Kelmendi of Kosovo won the country's first-ever Olympic medal, and it was gold. Kelmendi is one of the best judo athletes in the world. She competes in the 52 kilogram division.

This is the first time that athletes from Kosovo are permitted to represent their home country in the Olympics. 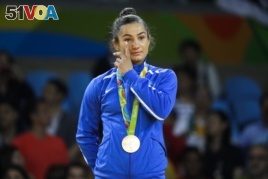 Kelmendi represented Albania in the 2012 London Games. She won the bronze medal.

There was another Olympic first in the 10-meter air pistol event on Saturday. Hoang Xuan Vinh is from Vietnam. He defeated Brazilian Felipe Wu on the last shot of the competition to win the gold medal. It was Vietnam's first-ever Olympic gold medal.

One fan of the Vietnamese team was so excited, she wrote "I'm lit" in a post on Twitter.

Lit is a slang term used to express excitement.

And in the women’s sabre fencing competition on Monday morning, Ibtihaj Muhammad became the first-ever U.S. athlete to wear a hijab in the Olympics.

Muhammad is 30 years old and from the state of New Jersey. She is Muslim. She beat a fencer from Ukraine on Monday. But, shortly after, she lost to a French athlete.

But, Muhammad will see more Olympic action on Saturday when she competes in the team event.

What have you watched in the first three days of the Olympics? We want to hear from you. Write to us in the Comments Section or on 51VOA.COM.

slang – n. words that are not considered part of the standard vocabulary of a language; used informally

hijab – n. a head covering worn outside the home by Muslim women

rifle – n. a gun that has a long barrel and that is held against your shoulder when you shoot it

pistol – n. a small gun made to be aimed and fired with one hand

judo – n. a sport developed in Japan in which opponents attempt to throw or wrestle each other to the ground