Once a US Soldier, Iranian Immigrant Now Serves Veterans

Update Required To play the media you will need to either update your browser to a recent version or update your Flash plugin.
By Marsha James
15 March, 2017

But Ravandi insists that her service has not been selfless.

"Serving has always made me feel good and therefore, I consider it to be a self-serving act in a way, while it's still helping others. So, service was something that I thought I would end up doing one way or another."

"I come from a place where people get killed, prosecuted, imprisoned for every ounce of freedom that they want in life and at the end, when all the blood is shed, and all the people that are imprisoned – you still don't have it." 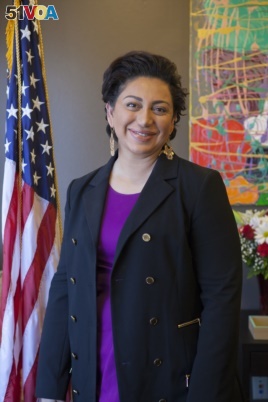 Ravandi was 29 when she entered the military. Basic training is always difficult. Ravandi found it especially hard. She was surrounded by enlistees years younger than she. But she says, the experience taught her a lot, especially about herself.

"The system was incredibly comprehensive and it taught me a lot physically, emotionally, mentally. My favorite part in the basic training experience that I had was marksmanship. I loved shooting my weapon, and I soon learned that I was physically more capable than I thought I was."

But marksmanship did not turn out to be Ravandi's most important skill during her deployment in Afghanistan. She says, there, her native language, Farsi, proved a more powerful weapon in the effort to serve and protect. Farsi is very similar to Dari, the most common language spoken in Afghanistan.

"I was asked to teach infantry soldiers the Farsi language. The Farsi that I taught was to build relationships. So, the first thing that I would teach them, it was in Dari dialect, which is the primary language of Afghanistan, and I would say, after you meet someone tell them ‘Beysar khosh shodam,' which means it is nice to meet you. And I think that kindness and that notion, that gesture, can bring people together."

Assal Ravandi was recognized for her work in teaching Farsi to infantry soldiers. Her battalion commander presented her with a medal.

Ravandi's duty in Afghanistan and the Army had a major impact on her. After she left military service she found that nothing else measured up to the work she did as a soldier.

"I felt so privileged, so honored to serve in the United States military. I think until I actually got there, I didn't know it was everything that I ever wanted and to be honest with you, I don't remember who I was before I was a soldier."

Returning to civilian life was not easy for Ravandi.

However, Ravandi did know what she wanted back from Army life.

"The one thing that I missed the most, that could make me feel better was the community and camaraderie in the United States military."

So, she recreated it outside of the military by founding the Academy of United States Veterans. The group provides public and media relations support to veteran service organizations, veterans programs and veteran-owned businesses.

Assal Ravandi says she does not think her story would have been possible in any other country in the world. She still expresses wonder that, in her words, "freedom is something that is just given to you" in the United States.

"I take a lot of joy in this incredible life. This opportunity that's been given to me and to wake up every day and to know that I have put all the effort, all the thought, all the energy into something and in the end it was worthwhile."

inspire - v. to make (someone) want to do something

enlistee – n. a person who signs up for military service

camaraderie – n. a feeling of good friendship among the people in a group

infantry – n. the part of an army that has soldiers who fight on foot

gesture – n. something said or done to show a particular feeling or attitude

post-traumatic stress – n. a mental health problem that some people develop after experiencing or witnessing a life-threatening event, like combat, a natural disaster, a car accident, or sexual assault.

privilege – n. a special opportunity to do something that makes you proud