Update Required To play the media you will need to either update your browser to a recent version or update your Flash plugin.
By Dan Friedell
07 October 2022


Kimchi is a traditional food served in South Korea.

The main part of the food is a preserved vegetable, often cabbage.

But this year, Kimchi is more costly than usual because the cabbage crop has been small. Some farmers say climate change has made it harder to grow cabbage. Temperatures have been high and there has been more rain than usual. 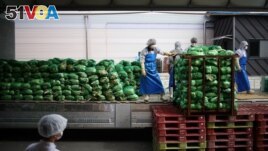 Businesses that sell kimchi are having trouble making money because there is less cabbage than most years. Their costs for cabbage doubled over just three months this year. Cabbage prices reached their highest level in 24 years last summer.

In addition, kimchi is getting more popular around the world so there is more competition. For example, food-makers in China are now growing cabbage and making kimchi and selling it to people in South Korea.

So the South Korean government is making plans to build two large holding places for cabbage. The places will be the size of three soccer fields and be able to hold 10,000 tons of cabbage.

The holding places will cost about $40 million and are expected to be ready in 2025. They will be built in the rural areas of Goesan and Haenam.

The large holding buildings will help small kimchi makers who are not able to buy as much cabbage as they want. Ahn Ik-jin runs the kimchi maker Cheongone Organic. In most years, he said, the company would buy cabbage in June and hold onto it to use later in the year. But this year, they were not able to buy enough cabbage.

As a result, the company is only producing 10 tons of kimchi each day. In past years, it would make 15 tons daily. Cheongone Organic has also raised prices by over 60 percent. The kimchi now costs about $3.50 per kilogram.

The higher prices are a problem for the South Korean kimchi companies because the kimchi coming from China is much less costly. The Chinese-made kimchi now has 40 percent of the market. It is about one third the cost of local kimchi.

A study by Korea Rating & Data showed that about 1,000 South Korean kimchi makers went out of business or switched to making other products last year.

The government hopes the new cabbage holding places can help businesses that make kimchi. There is a growing interest in South Korean culture around the world. One of the most popular music groups in the world is BTS and a television program – Squid Game – is successful on the Netflix streaming video service. There is also interest in eating kimchi. As a result, the amount of money from kimchi exports rose over 10 percent in 2021, to a total of $160 million.

Kimchi is more popular than ever, but there are some concerns at home. Many South Korean people like to make their own kimchi and share it with friends and families during a time known as kimjang. But, many people are no longer making it at home because the ingredients are so costly.

Kim Sook-kyung is 72 years old. She talked with a reporter while shopping at a food store. She said she plans to make her own kimchi some of the time and other times buy it at the store.

Sales numbers at the food store company Hanaro Mart suggest she is thinking in the same way as many other Koreans. Since August, the food store has sold 20 percent more containers of kimchi compared to the same period last year.

switch –v. to make a change from one thing to another

streaming –adj. playing continuously as data sent over the internet to computers

ingredient –n. one of the things that is used to make food