Update Required To play the media you will need to either update your browser to a recent version or update your Flash plugin.
By Jim Dresbach
07 January, 2016


Reports from Libya say a truck bombing has killed at least 50 people at a police training center. Many others were reported wounded.

The bomb exploded Thursday in the western Libyan town of Zliten, as hundreds of new police officers gathered for training at the center. The town sits on the Mediterranean Sea, about 160 kilometers east of Tripoli.

Reports conflict on the number of dead. But a witness at a hospital told the Reuters news service that 65 people had died. 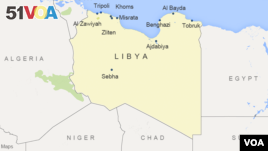 The head of the United Nations Support Mission in Libya said on social media that the bombing was "a suicide attack."

The Wall Street Journal reported a law enforcement witness said a truck crashed through the security gate at the training center. The newspaper reported that the truck exploded around a large crowd of officers and new recruits.

There has been no claim of responsibility for the attack.

Libya has been in chaos since 2011, when Libyan leader Moammar Gadhafi was overthrown and killed. The country is split between the Islamist administration that seized Tripoli and the internationally recognized parliament that fled to Tobruk.

The Islamic State is also attempting to gain more influence in the country, according to numerous media reports.

This report was based on information from VOANews. Jim Dresbach adapted the story for Learning English. George Grow was the editor.

mission – n. a task considered to be very important duty