Update Required To play the media you will need to either update your browser to a recent version or update your Flash plugin.
By Bryan Lynn
22 November 2021


Two members of a U.S.-based religious group who were taken hostage last month in Haiti have been released.

The organization that sent the missionaries, Christian Aid Ministries, announced the release on Sunday. A spokesman for Haiti's national police force also confirmed the release to news agencies.

The group of 16 American citizens and one Canadian was kidnapped by a group called 400 Mawozo on October 16. There are five children in the group, including an 8-month-old.

The organization said the group was taken while on a trip to visit an orphanage - a home for children who do not have parents to take care of them. 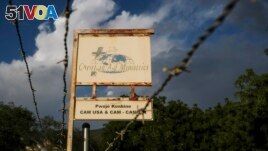 In a statement, Christian Aid Ministries said the released hostages were safe and "in good spirits."

"While we rejoice at this release, our hearts are with the 15 people who are still being held," the Ohio-based group said. The statement did not give the names of those freed or provide any other information about the release.

The leader of the 400 Mawozo gang has threatened to kill the hostages unless his demands are met. Haitian officials have said the gang had demanded up to $1 million for each person.

The release comes as Haiti struggles with a recent rise in gang-related kidnappings. Increasing crime and insecurity followed the murder of President Jovenel Mo&#239;se on July 7 and a powerful earthquake that killed more than 2,200 people in August.

The issues led the U.S. government recently to urge U.S. citizens to leave Haiti. On Friday, Canada announced it was withdrawing all but necessary employees from its embassy.

A fuel shortage has forced hospitals to turn away patients and affected public transportation. The situation also led some schools to close and businesses to shorten their work hours.

missionary – n. a person who is sent to a foreign country to do religious work (such as to persuade people to join a religion or to help people who are sick, poor, etc.)

rejoice – v. to feel very happy because something good has happened