UN: 1 in 10 Children Globally Is Victim of Child Labor

Update Required To play the media you will need to either update your browser to a recent version or update your Flash plugin.
By Susan Shand
13 June, 2019


Tens of millions of children are forced to work in countries around the world. The United Nations International Labor Organization called for an end to child labor Wednesday to mark World Day Against Child Labor. The Geneva, Switzerland-based ILO is holding its yearly International Labor Conference.

Children as young as five are among the 152 million victims of child labor. Many of them work long hours, for little or no money, in slave-like conditions. The International Labor Organization says half of them are involved in unhealthy and dangerous work.

The ILO says most children work in agriculture. They can also be found in the mining, building, fishing and domestic service industries.

Beate Andrees is Chief of the ILO's Fundamental Principles and Rights at Work Branch. She told VOA that when children are forced into the worst forms of labor, such as debt slavery and sex work, they suffer permanent physical and mental damage. 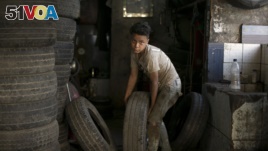 A boy carries a tire into the repair shop where he works in Cairo, Egypt, Wednesday, June 12, 2019. According to UN figures, 152 million children worldwide are working in almost every sector, with seven out of every ten children working in agriculture. (AP Photo/Maya Alleruzzo)

Andrees said some progress has been made in reducing child labor in Asia and Latin America, but reductions in Africa are decreasing. She said Africa now has the highest levels of child labor in the world.

"This is not necessarily linked to a lack of action," Andrees said, explaining that migration, poverty and other problems can lead to child labor.

Andrees said she was pleased to see the African Union taking decisive measures to end child labor. She noted the AU is developing a ten-year plan to decrease child labor as called for in the UN's Sustainable Development Goals.

The SDG has called for the end of child labor by 2025. However, at the current of reduction, Andrees warns the world will easily miss that goal.

domestic - adj. in the home