More US Raids Possible on the Ground in Iraq


The U.S. says more raids could occur in northern Iraq like the one that rescued 70 hostages last week.

"No target is beyond our reach," said Secretary of Defense Ash Carter. He spoke during a congressional hearing on American military strategy in the Middle East on Tuesday.

"We won't hold back from supporting capable partners in opportunistic attacks against" the Islamic State, Carter said. 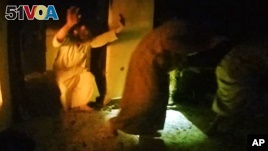 This image made from video taken on Thursday, Oct. 22, 2015 from a helmet camera, shows U.S. and Iraqi special forces freeing hostages from a prison controlled by Islamic State militants.

Future strikes could come on the ground if needed.

The Kurds released a dramatic video taken with a helmet-mounted camera showing the raid. About 60 Kurdish and U.S. soldiers worked together during the rescue on Oct. 22.

They attacked an Islamic State (IS) prison near the Iraqi city of Kirkuk and released the captives.

The hostages were in serious danger.

They said they expected to be executed the next day.

"Their graves had already been prepared," Carter said.

In a follow-up video, some of the rescued hostages told of their experiences in captivity.

They talked about a constant feeling of dread as three or four hostages were executed each day.

Another man talked of being tortured multiple times with electric shocks and beatings.

Six Islamic State militants were detained and 20 were killed, according to the Kurdish government.

An American special-forces soldier, Joshua Wheeler of Oklahoma, died of gunfire during the rescue. He was the father of four sons.

In the video, dozens of men wearing traditional robes, called galabia, emerged from a dimly lit doorway with their hands up. Gunshots echoed in the background.

The video cut to another scene as other men walked down a hallway with the Islamic State flag tacked to the wall. Soldiers checked their bodies for weapons before herding them to another location.

It is the sort of scene you only see on television or in movies.

But the recording is real.

On Monday, a Pentagon spokesman confirmed the authenticity of the video. Captain Jeff Davis said the U.S. approved the Iraqis' use of helmet cameras and knew the video would be released.

Officials said about 20 of the rescued men were part of the Iraqi security forces. They were all taken to the city of Irbil.

The original plan was for the Kurdish soldiers to conduct the rescue. But once the Kurds started taking heavy gunfire, the Americans entered the fight.

That's when Wheeler was shot. He was a 20-year Army veteran and earned 11 Bronze Star medals. He was 39.