Why Sri Lanka’s Economy Collapsed and What Is Next

Update Required To play the media you will need to either update your browser to a recent version or update your Flash plugin.
By Gregory Stachel
26 June 2022


Sri Lanka's prime minister recently said his nation's debt-stricken economy has "collapsed." The South Asian island country is running out of money to pay for food and fuel. It is seeking help from neighboring India and China and from the International Monetary Fund (IMF).

Prime Minister Ranil Wickremesinghe took office in May. He described the difficult task he faces in turning around an economy that he said is heading for "rock bottom." 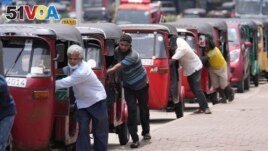 The United Nations World Food Program says nearly nine of 10 families in Sri Lanka are going without some meals or otherwise decreasing how much they eat. Three million of the country's 23 million people are receiving emergency humanitarian aid.

Doctors are using social media to try and get important supplies of equipment and medicine. Growing numbers of Sri Lankans are seeking passports to go overseas in search of work.

Economists say the crisis comes from in-country causes such as years of poor leadership and corruption. They also say it comes from other troubles, such as growing debt, the effects of the pandemic and terror attacks that hurt the tourism industry.

The government needed to increase its income as foreign debt for large projects increased. But instead, Rajapaksa pushed through the largest tax cuts in Sri Lankan history, which recently were undone. Creditors decreased Sri Lanka's ratings, which blocked the country from borrowing more money as its foreign reserves fell sharply.

This year, the war in Ukraine has pushed prices of food and oil higher. Inflation was close to 40 percent and food prices were up nearly 60 percent in May.

The Finance Ministry says Sri Lanka has only $25 million in usable foreign reserves. That has left it without the ability to pay for imports or repay billions in debt.

The local money, the Sri Lankan rupee, has weakened in value by nearly 80 percent. That makes costs of imports even higher.

So far, Sri Lanka has gotten through mainly by $4 billion in credit lines from neighboring India. But Wickremesinghe warned against expecting India to keep supporting Sri Lanka.

The government is in negotiations with the IMF on a bailout plan. Wickremesinghe said Wednesday he expects to have some agreement with the IMF by late July.

The government also is seeking more help from China. Other governments like the U.S., Japan, and Australia have provided a few hundred million dollars in extra support.

Earlier this month, the United Nations began asking countries around the world to help. So far, the estimated financial help is not close to the $6 billion the country needs to keep running over the next six months.

humanitarian – adj. connected with helping people who are suffering and improving the conditions that they are living in

income – n. money that is earned from work, investments, business