Update Required To play the media you will need to either update your browser to a recent version or update your Flash plugin.
By VOA
Nov 8, 2017


The Iranian regime's harassment and intimidation of journalists continues.

UN Special Rapporteur on the human rights situation in Iran Asma Jahangir recently told the General Assembly about “disturbing” reports she received of violations against the rights to freedom of expression, opinion, information and the press:

“As of June 2017, at least 12 journalists, as well as 14 bloggers and social media activists were either in detention or had been sentenced for their peaceful activities. Other media report being subjected to interrogation, surveillance and other forms of harassment and intimidation.”

As Ms. Jahangir noted, the abuse is not confined to journalists living in Iran. On a visit to the United Kingdom, she met with a number of individuals who worked in the Persian Service of the BBC:

“They described how they have been harassed and intimidated by agents of the state. In some cases, I understand that those targeted did not return to work. I have also received reports of family members being called in for questioning and warned of dire consequences if their relatives continued to work for the BBC Persian service, and the imposition of asset freezes preventing the journalists, for example, from being able to sell property in Iran.”

A recent investigation by Reporters without Borders shows that the attempts by Iran's intelligence services and judicial system to influence the Persian-language services of international media outlets are not confined to the BBC. Journalists from Voice of America, Radio Farda, Manoto TV, and Amadnews have been threatened, some with death; and the families of others have been subjected to interrogation and arrest. 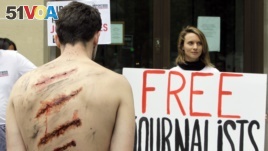 In its latest annual report on human rights conditions in Iran, the State Department also noted the detention, abuse, and prosecution of publishers, editors, and journalists for their reporting.

The Iranian people, like people everywhere, deserve the chance to learn the truth about their society, their government, and the world -- truth that dedicated journalists seek to convey. The threats to Iranian journalists and their families must stop.

As State Department Spokesperson Heather Nauert said earlier this month on International Day to End Impunity for Crimes against Journalists, “The United States renews its dedication to promoting a free, professional and independent press abroad and to advocating for accountability for those who would undermine a free press with threats, intimidation, and violence.”