The Role of Cities in Countering Violent Extremism

Update Required To play the media you will need to either update your browser to a recent version or update your Flash plugin.
By VOA
Aug 25, 2017


The U.S. Department of State, later joined in this effort by the Governments of Denmark and Norway, launched the Strong Cities Network, or SCN, in September 2015. The SCN seeks to build resilience against violent extremism among cities around the world by connecting cities and local leaders to share experiences and ideas that will help develop effective and cost-efficient strategies to decrease radicalization among high risk groups and to diminish the effects of violence.

The organization encourages social cohesion. In Orlando, Florida, the site of the June 2016 Pulse nightclub attack, even prior to the attack, city leaders encouraged resilience over isolation and stigmatization. Police coached vulnerable youth in sports leagues and the city engaged community groups on a regular basis. Members of the Muslim and LGBTQ communities showed solidarity with each other by flanking the mayor at his press conference in the wake of the attack. 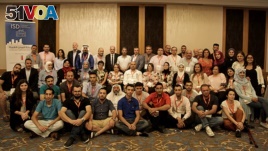 Orlando is only one of 115 member cities over six continents including large cities such as Beirut, Buenos Aires, London, Los Angeles, and Paris, and smaller cities such as Kacanik, Kosovo where per capita cases of radical violence are high.

In Aarhus, Denmark, the SCN has developed a program to partner young people who exhibit tendencies to radical violence with mentors who have faced the same challenges. This program, informally called the “Aarhus Model,” was designed to deal with violent extremists and has expanded its focus after the rise of al-Qa'ida and ISIS.

“My travels and meetings have given me renewed hope that nations of many faiths can unite to defeat terrorism, a common threat to all of humanity. Terrorism must be stopped in its tracks... We must be tough. We must be strong. And we must be vigilant.”

As President Trump has said, “We will never waiver in our determination to defeat terrorism and to achieve lasting security, prosperity and peace.”