Greece's Debt Crisis and the Future of Europe

Update Required To play the media you will need to either update your browser to a recent version or update your Flash plugin.
By VOA
2011-9-15 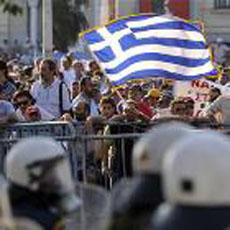 Finance ministers from the euro area meet Friday in Poland to discuss the Greek debt crisis. American Treasury Secretary Tim Geithner is joining them. Fabian Zuleeg, chief economist at the European Policy Center in Brussels, says the United States is right to get involved.

FABIAN ZULEEG: "The intervention from the US has also shown at least a risk that the stability of the financial system as a whole -- the global financial system -- might be under threat again. That we might have a financial situation where a possible default of Greece might have knock-on effects around the world as well."

On Wednesday, the leaders of France, Germany and Greece held a conference call to discuss how to contain Europe's deepening financial crisis.

Seventeen European Union countries use the euro as their currency. Fabian Zuleeg says the future of the euro zone is anyone's guess right now.

FABIAN ZULEEG: "I don't think a very orderly exit of a single country is a very likely scenario."

On Thursday, five major central banks agreed to lend additional dollars to European banks in the euro zone. The European Central Bank says the three-month loans will provide as many dollars as the banks need. The operations will end in December.

The European Central Bank is acting with the United States Federal Reserve, the Bank of England, the Bank of Japan and the Swiss National Bank.

Last week, the Paris-based Organization for Economic Cooperation and Development lowered its growth estimates for the euro area. In Greece the economy has shrunk this year.

German Chancellor Angela Merkel says eurozone nations must do everything they can to avoid an "uncontrolled insolvency" by Greece. On Tuesday Chancellor Merkel warned of far-reaching effects if Greece fails to pay its international rescue loans.

If Greece defaults on its debts, she said, then the effects would quickly spread to other euro zone countries. And, she said, "if the euro fails, Europe fails."

The crisis has increased calls for greater cooperation on European financial policy. On Wednesday, European Commission President Jose Manuel Barroso said the commission will propose creating "eurobonds." The idea is for euro zone governments to jointly guarantee their debts. Germany and France have opposed eurobonds.

JOSE MANUEL BARROSO: "I am convinced we need a deeper and more results-driven integration. And let me be clear, this has to be within the community system. A system based purely on intergovernment cooperation has not worked in the past and will not work in the future."

He spoke to the European Parliament in Strasbourg, France.