Update Required To play the media you will need to either update your browser to a recent version or update your Flash plugin.
By VOA
2011-8-18 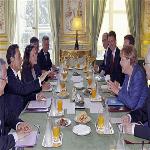 Photo: AP
French and German leader attend a meeting Tuesday in Paris to discuss how to deal with Europe's debt crisis

Eleven countries first began to use the euro in nineteen ninety-nine. Today seventeen of the twenty-seven members of the European Union are in the euro area.

The euro's foreign exchange value has remained strong against the dollar and other currencies. But economic growth in the euro area was only two-tenths of one percent from April to June. Europe's biggest economy, Germany, grew at half that rate.

Italy and Spain have yet to recover from the worldwide recession. The purchases of their government debt helped reduce their borrowing costs, but the bank will probably have to act again.

On Tuesday German Chancellor Angela Merkel and French President Nicolas Sarkozy met in Paris. They discussed economic governance for the euro area and cooperation on budget and tax policies. Chancellor Merkel said, "We want France and Germany to move closer in terms of fiscal integration." President Sarkozy agreed that the two neighbors must move closer on budget issues.

Their proposal calls for a "true European economic government." It would include the leaders of the seventeen euro countries and would be led by the European Union president. The current president is Herman Van Rompuy of Belgium.  The group would meet at least twice a year.

One goal would be to control budget deficits for euro area countries.  Rules limit the deficits of EU members to three percent of the size of their economies. But many members, including France, have bigger deficits than that.

The two leaders also proposed a tax on financial dealings in Europe. But they did not support the idea of euro bonds. These would be loans guaranteed by all euro countries instead of only the governments seeking them.

The European Commission says it supports the French and German proposals. The commission proposes and enforces legislation for the EU. On Wednesday, EU spokesman Olivier Bailly said the calls for an economic government were a step in the right direction.

OLIVIER BAILLY: "We already mentioned the need to strengthen the economic part of the economic and monetary union.  What is happening now since the beginning of the crisis and what has been announced yesterday as a proposal by France and Germany go exactly in this direction."

But many experts question whether European countries will be willing to surrender individual powers and deal with their debt problems together.