Palestinians Apply to UN; US Links Pakistan to Attacks

Update Required To play the media you will need to either update your browser to a recent version or update your Flash plugin.
By VOA
2011-9-23 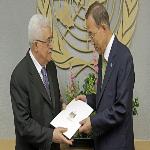 Palestinians brought their calls for independence to the United Nations this week. Palestinian Authority President Mahmoud Abbas spoke to the General Assembly on Friday.

MAHMOUD ABBAS: "I say the time has come for my courageous and proud people, after decades of displacement and colonial occupation and ceaseless suffering, to live like other peoples of the earth, free in a sovereign and independent homeland."

Mr. Abbas asked the United Nations to admit Palestine as a full member based on nineteen sixty-seven borders.

The UN Security Council could take weeks to consider the request for full membership. That would give more time for diplomatic efforts to restart peace talks. The Palestinians could also seek more recognition in the General Assembly as a non-voting observer state.

Admiral Mike Mullen spoke at a Senate hearing; he retires next week as chairman of the Joint Chiefs of Staff. He said Pakistan's Inter-Services Intelligence agency supported the truck bombing by Haqqani operatives on a NATO base on September tenth. He said the ISI also supported an attack on the American Embassy in Kabul two days later. 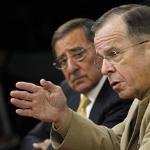 Admiral Mullen said the Haqqani network has deep ties to the Pakistani government.

MIKE MULLEN: "The Haqqani network, for one, acts as a veritable arm of Pakistan's internal services intelligence agency."

He says the United States should still try to work with Pakistan. But he warned that the relationship -- and the future of Pakistan -- could be in danger.

MIKE MULLEN: "By exporting violence, they've eroded their internal security and their position in the region. They've undermined their international credibility and threatened their economic well-being. Only a decision to break with this policy can pave the road to a positive future for Pakistan."

LEON PANETTA: "We cannot allow terrorists to have safe havens from which they launch attacks and kill our forces. We cannot allow that to happen, and we have to bring pressure on the Pakistanis to do their part to confront that issue."

Relations have worsened since the killing of Osama bin Laden at his home in Pakistan earlier this year.

Michael O'Hanlon is with the Brookings Institution in Washington.

MICHAEL O'HANLON: "I think Pakistan is just going to have to wake up and smell the roses that this is not consistent with an ongoing relationship in which the United States provides three and a half billion dollars a year in aid."

On Friday, the White House press secretary said Pakistan must break any links it has with the Haqqani network.

Pakistani Foreign Minister Hina Rabbani Khar said the United States risks losing Pakistan as a partner if it continues to make such accusations. She spoke on Pakistan's Geo TV.