Questions for Britain After the Riots

Update Required To play the media you will need to either update your browser to a recent version or update your Flash plugin.
By VOA
2011-8-12

Photo: ASSOCIATED PRESS
Rioters run through the street of the South London area of Croydon as a shop burns behind them.

This week, Britain faced its worst riots since the nineteen eighties. The unrest began in London and spread to other cities, including Manchester, Birmingham and Liverpool.

Police have been launching raids, making arrests and studying images from security cameras. Officials charged hundreds of people with disorder, violence and stealing from looted stores.

Police said a sixty-eight-year-old man became the fifth person to die as a result of the violence. He was attacked during the riots.

The rioting began last Saturday after a peaceful demonstration over the deadly police shooting of a twenty-nine-year-old man. The shooting happened last week in a poor neighborhood in north London.

Rioters burned buildings and cars, broke into hundreds of stores and fought with police.

Britain had its first calm night on Wednesday. Sixteen thousand police officers will remain on duty in London through the coming days. This is the most ever during peacetime.

Prime Minister David Cameron says he will seek advice from American cities that have fought gang violence. These include Boston, Los Angeles and New York.

Mr. Cameron returned early from a vacation to deal with the unrest. He said he was considering interfering with electronic devices and websites that rioters have used to organize their activities.

DAVID CAMERON: "Free flow of information can be used for good but it can also be used for ill. So we are working with the police, the intelligence services and industry to look at whether it would be right to stop people from communicating via these websites and services when we know they are plotting violence, disorder and criminality."

Mr. Cameron spoke Thursday at an emergency meeting of parliament. He said the violence was not political but criminal. 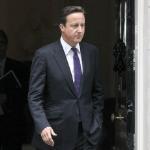 DAVID CAMERON: "Mr. Speaker, we will not put up with this in our country. We will not allow a culture of fear to exist on our streets, and we will do whatever it takes to restore law and order and to rebuild our communities."

In Birmingham, three Pakistani men were killed Wednesday when a car struck them as they tried to protect businesses in their community. Hours later, Tariq Jahan, the father of twenty-one-year-old victim Haroon Jahan, appealed for calm.

TARIQ JAHAN: "Basically, I lost my son. Blacks, Asians, whites -- we all live in the same community. Why do we have to kill one another? What started these riots, and what's escalated? Why are we doing this?"

Many people blamed the unrest on high unemployment, slow economic recovery and cuts to public services by the new British government. Mr. Cameron blamed it on selfishness, lack of responsibility, poor discipline in schools and bad parenting.

Chris Hamnett lives in north London, not far from some of the worst rioting.

CHRIS HAMNETT: "Essentially, what we've seen is rioting for fun and profit. This is not people expressing their anger against an oppressive state. This is people thinking it would be nice to get a slice of the action."

The riots were centered in neighborhoods with large African and Caribbean populations. Both groups have a history of tensions with the police. Basani Mabyalane lives in the area.

BASANI MABYALANE: "I feel there is maybe more that could be done to empower the young people because, from what I saw yesterday, to me it looked like they don't have much to do. They have got the time. They have got the energy. But they are using that energy on negative things."

In the north London neighborhood of Haringey, some young people are using their energy to do positive things. They have formed a group called HYPE: Haringey's Young People Empowered.

One of those young people is Erica Lopez. She thinks a majority of the rioters simply wanted to loot. But she says she understands and shares the anger of many of her young neighbors over a lack of jobs and cuts in youth services.

ERICA LOPEZ: "The government really needs to actually take time and listen to these young people because for a long time they have been crying in silence saying, 'This is what matters to me.' They have really been crying for a long time."