Update Required To play the media you will need to either update your browser to a recent version or update your Flash plugin.
By VOA
2011-9-2 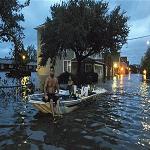 Photo: AP
Two men use a boat to get down the street in Manteo, North Carolina Saturday, August 27.

Emergency crews in the eastern United States are still working to help people affected by Hurricane Irene. The hurricane struck the coast of North Carolina with winds of up to one hundred twenty kilometers an hour last Saturday. The storm weakened as it moved north. But Irene brought heavy rains and destructive winds to the densely populated east coast.

Irene is blamed for more than forty deaths in the United States. Five deaths were reported in the Caribbean.

New York Governor Andrew Cuomo estimated his state suffered one billion dollars in damage. Estimates place the total damage from the storm at about seven billion dollars. Insurance companies are expected to pay forty to fifty percent of these costs. But costs of lost trade for the travel industry, especially in North Carolina, will be high at a time when the nation's economy is struggling. The government reported Friday that the national unemployment rate held at nine point one percent in August.

High winds and flooding from Irene brought down electrical lines, causing about four million people to lose power. Days after the storm, hundreds of thousands were still without electricity.

Many states in the path of Irene declared disasters. Governors in several states activated over four thousand National Guard members to help in rescue and relief efforts.

In North Carolina, some communities near the ocean were flooded and cut off from the mainland. And the small northeastern state of Vermont was especially hard hit. Emergency workers have had to airlift food and supplies to thousands of people trapped by flood waters. Officials said it was the worst flooding in Vermont in almost one hundred years. This man describes what he saw in the community of Woodstock.

MICHAEL RICCI: "The water in the yard was almost up to the house, which is another ten feet above this level, which is probably fifteen or twenty feet above the normal river level. So the water was really, really up very high. And the force of it was beyond our comprehension."

Roger Pielke is a professor in environmental studies at the University of Colorado. He says the economic costs of hurricanes have grown many times over the years. This is because millions of people in the United States have crowded coastal areas that are often affected by storms.

ROGER PIELKE: "Along the entire coast from Texas all the way up through Maine in the United States, there are today very few locations where a hurricane can make landfall without causing an enormous amount of damage."

Irene is unlikely to be the only major hurricane this year. Two powerful storms are threatening the coastal United States. One is nearing the Gulf of Mexico, the other is in the Atlantic Ocean.

September is normally the most active month of the hurricane season. Experts predicted eight to ten hurricanes in two thousand eleven. That is higher than normal.

And that's IN THE NEWS in VOA Special English. For transcripts and mp3 of our programs, go to 51voa.com. And follow us on Facebook and Twitter at VOA Learning English. I'm Steve Ember.