Update Required To play the media you will need to either update your browser to a recent version or update your Flash plugin.
By VOA
2011-8-26 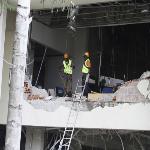 Photo: Reuters
Rescue workers at the United Nations offices in Abuja. The explosion happened after a car crashed into the building.

A deadly car bombing at the United Nations building in Abuja has brought more attention to an Islamic group. The attack happened Friday morning in the Nigerian capital. Later, a man claiming to represent Boko Haram spoke by telephone with a VOA reporter. He said the group carried out the attack and warned that "this is just the beginning."

The spokesman said the bombing was in reaction to the Nigerian military's increased presence in the northeastern state of Borno. Boko Haram is active there. The government sent more troops after an increase in suspected Boko Haram shootings and bombings.

In the Hausa language, the group's name means "western education is a sin." Boko Haram wants Islamic law or sharia to be established more widely across Africa's most populous nation. Western security officials say Boko Haram may have ties to the north African group known as al-Qaida in the Islamic Maghreb.

Boko Haram launched a violent uprising in July of two thousand nine. Nigeria's military crushed that unrest. Since then, Boko Haram has attacked police, politicians and community leaders. The group claimed responsibility for a major attack on Abuja's police headquarters in June.

Former VOA reporter Josephine Kamara and her husband work at the UN building in Abuja. She had driven him to work shortly before the explosion. Her husband is safe. She described the destruction to VOA's Joe DeCapua.

JOSEPHINE KAMARA: "Right now, I'm standing in front of the UN building, Joe and I see the front part of the main UN building. There are shattered windows. Hardly any of the windows are left standing. This building is about three floors, plus the ground floor, making it four floors. All the way up to the top floor, there's shattered windows, there's debris. There are mangos, iron rods all over the place. And I see a lot of the UN staffers' family members are standing out here. Also, it looks like the entire Abuja police force has actually come to the UN building, standing here, trying to get casualties out. Those that are badly hurt have been taken to the hospital."

In a statement, Nigerian President Goodluck Jonathan called the attack, "barbaric, senseless and cowardly." He said his government remains committed to fighting terrorism.

President Obama also called it a "horrific and cowardly attack."

BAN KI-MOON: "Around eleven o'clock this morning local time, the UN house in the Nigeria capital, Abuja, was struck by a car bomb. These buildings house twenty-six humanitarian and development agencies of the UN family. This was an assault on those who devote their lives to helping others. We condemn this terrible act utterly."

The secretary-general warned that UN offices are increasingly at risk of attacks like the bombing in Abuja.

BAN KI-MOON: "Let me say it clearly: these acts of terrorism are unacceptable. They will not deter us from our vital work for the people of Nigeria and the world. This outrageous and shocking attack is evidence that the UN premises are increasingly being viewed as soft targets by extremist elements around the world."

In December of two thousand seven, a bombing at UN offices in the Algerian capital killed seventeen employees. And in August of two thousand three, a suicide bomber struck the UN headquarters in Baghdad. Twenty-two workers were killed. They included the top UN diplomat in Iraq, Sergio Vieira de Mello of Brazil.

And that's IN THE NEWS in VOA Special English. For the latest news, go to 51voa.com. I'm Steve Ember.