Update Required To play the media you will need to either update your browser to a recent version or update your Flash plugin.
By Jerilyn Watson
2010-9-3 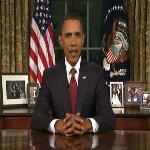 American Defense Secretary Robert Gates says history will judge whether the war in Iraq was justified. He spoke during a visit to a military base in western Iraq. Secretary Gates visited the base after President Obama officially declared an end to American combat operations in Iraq. The president made the announcement at the White House earlier this week.

America's involvement in the armed conflict lasted more than seven years. During the most intense fighting, about 165,000 American soldiers served in Iraq. About 4,400 of the soldiers died in the war. An estimated 100,000 Iraqis were killed. The effort has cost billions of dollars.

The war began in March of 2003. The United States led an international coalition against the government of Iraqi leader Saddam Hussein. At the time, the American president was George W. Bush. His administration received reports that seemed to show that Iraq had weapons of mass destruction. Later, the information proved mistaken. No such weapons were found.

At first, the American-led forces were successful. By May of 2003, President Bush declared that major fighting operations had ended. Coalition troops had occupied Baghdad, and Saddam Hussein had fled.

But as time passed, resistance forces grew stronger. Violence spread among Iraq's many Shi'ite and Sunni groups. And, supporters of al-Qaida joined the fighting. Coalition forces often became the targets of bombs and missiles.

In 2007, President Bush ordered a surge in America's troop strength in Iraq. Thousands of additional troops were deployed around Baghdad and the western province of al-Anbar. They changed the balance of the war. Coalition troops defeated many resistance fighters and militants.

Over the past few months, many American troops have left Iraq. 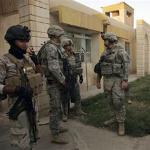 This week, the American military campaign in Iraq changed names – and goals. The campaign had been called Operation Iraqi Freedom. Now, it is known as Operation New Dawn.

The United States now has fewer than 50,000 soldiers left in Iraq. Their job is to assist and advise Iraqis. However, some soldiers will continue to help Iraqi forces search for resistance fighters.

For example, members of an American special operations group went with Iraqi forces Wednesday to the village of Hawija. One thousand Iraqi soldiers were to arrest suspected terrorists. The Americans raided houses and seized many suspects.

Some Iraqi military officers have expressed worry that the United States is ending battle operations too soon. Politically, Iraq still faces problems. Elections held six months ago failed to produce a clear winner. For this reason, the country has yet to form a new government.

And that's IN THE NEWS in VOA Special English, written by Jerilyn Watson. I'm Steve Ember.