Two opposition party Cambodian lawmakers were seriously injured Monday after they were beaten by protestors outside the parliament building in Phnom Penh.

The protesters demanded the removal of CNRP President Kem Sokha. Most of the demonstrators left after delivering a petition to the Cambodian Assembly on Monday, according to reports from the Cambodian capital. But a small group remained, waiting for lawmakers to leave the building after a morning session. 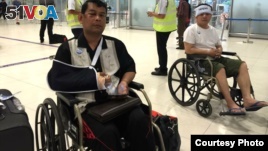 Cambodian opposition CNRP lawmakers Nhay Chamroeun (left) and Kong Saphea (right) are seen arriving in wheelchairs at a Bangkok airport on Tuesday, October 27, 2015 after being beaten by protesters in Phnom Penh, Cambodia on Monday. (Courtesy of Nhay Cha

Nhoy Chamreoun and Kong Sakphea were kicked in the head by some of the protestors. It left them bloodied and dazed. Both required hospital treatment. Chamreoun required surgery.

"Regardless of who they are - whether they are supporters of the Cambodian People's Party (CPP), the royal government, the opposition party, whoever committed this cheap act must be punished," he said.

Opposition politicians in Cambodia have faced arrests during government crackdowns against protests. But this is the first direct physical attack against members of parliament in the last several years.

Neou Vannarin and Sok Khemara reported on this story for VOANews.com. Bruce Alpert adapted this story for Learning English. Kathleen Struck was the editor.

Now it's your turn. Please comment in the section below or on 51VOA.COM.

crackdown – n. serious attempt to punish people for doing something that is not allowed

We want to hear from you. Write to us in the Comments Section or on 51VOA.COM. .