Update Required To play the media you will need to either update your browser to a recent version or update your Flash plugin.
By Matthew Caputo
10 July 2022


Environmentalist Brent Walls is helping to bring drone technology into the fight against pollution. He works for the Waterkeeper Alliance, a worldwide network of clean water groups. Walls teaches activists across the United States to pilot drones.

Drones permit activists to discover areas that would otherwise be difficult to travel to or may be costly to find. The unmanned aircraft are especially useful for searching for polluted areas surrounded by private land.

Images captured by drones permit environmentalists to build legal cases against polluters through the U.S. Clean Water Act. This law aims to protect the nation's water from numerous forms of pollution. 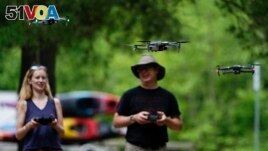 The Clean Water Act permits individuals – not just federal officials – to enforce the law. But even though drones can be very useful in searching out polluted areas, they are rarely used in this way. Walls hopes to change that.

To use drones to collect evidence, activists must have a federally issued pilot's certificate. They must also learn to work within state and local laws.

Walls is part of a group called "Riverkeepers." It is a non-profit organization that watches over and protects river systems across the United States. Walls himself is the Riverkeeper for the upper Potomac River in the northeastern United States.

The Riverkeepers have used drones to collect evidence for legal cases in the past. Walls says images from drones helped push a coal mining organization in West Virginia to clean up their operations.

Cara Schildtknecht is the Riverkeeper for the Waccamaw River, which flows through North Carolina and South Carolina. She recently completed her training course and received a pilot's certificate.

Schildtknecht told The Associated Press that using a drone will help her see areas in her watershed that are hard to reach by boat. The aircraft will also help her record floods and find polluters. The view from above, she said, "is a gamechanger," one that in the past required paying a pilot for a manned flight.

"We have certain areas that we know could be of concern that we want to check out," Schildtknecht said.

Drone technology has been developing very quickly. New drones are easier to fly and capture better images compared to older models. The drones used by Walls' students are paid for with a grant. They cost around $2,000 each.

In 2019, Walls presented drone images and other evidence to Specialty Granules, a mining company. As a result of the action, the company agreed to put a filtration system on one of its water systems that reduced pollution levels.

Matthew McClure is the vice president of operations at Specialty Granules. He said in a statement that the company uses its own drones in its business operations. He added that the company does not generally welcome surprise inspections from drones piloted by activists.

Anastasia Telesetsky is an environmental law professor at California Polytechnic State University. She told the Associated Press she thinks drones are a useful tool for finding pollution that has remained hidden.

She said, "There's a lot of groups that know there is a problem but have been limited in the tools they can use to compel regulators to do their jobs."

Martin Lively is the Grand Riverkeeper in northeastern Oklahoma. The area is home to a former mining site listed on the U.S. Superfund list. Superfund sites are polluted areas in the United States identified as requiring long-term measures to clean up hazardous pollution.

"It is extremely polluted with lead, zinc, arsenic, cadmium, manganese," Lively said of the site. "And all of that flows into my watershed."

Because of the pollution, the river water is tested often. But a drone can go a step further. It can help see, for example, whether cleaned up properties might be re-polluted during floods.

Lively says a drone is a storytelling tool that can capture powerful images. "That is a tool never to be underestimated in litigation," he said.

certificate – n. a document that is official proof that you have finished school or a course of training

watershed – n. the area of land that includes a particular river or lake and all the rivers, streams, etc., that flow into it

grant – n. an amount of money provided by a government or organization for a special purpose

filter – v. to pass liquid or gas through a piece of equipment in order to remove solid pieces of other substances

compel – v. to force (someone) to do something

regulator – v. an official who works for the part of the government that controls a public activity by making and enforcing rules

litigate – v. to make (something) the subject of a lawsuit