Foreign Producers to Continue Supplying Baby Formula to US

Update Required To play the media you will need to either update your browser to a recent version or update your Flash plugin.
By Dan Novak
09 July 2022


The U.S. government is trying to help foreign makers of baby formula stay in the U.S. market for a long period of time.

It is part of an effort to diversify the suppliers for manufactured mother's milk, or formula.

The move comes after federal officials ordered the closure of the largest American factory for baby formula. The closure created a nationwide shortage. 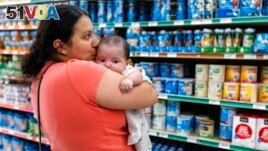 Foreign producers have recently sent supplies to the United States under temporary emergency approval to ease the shortage.

Recently, the Food and Drug Administration (FDA) said it will permit foreign producers to supply the U.S. with baby formula for a long time.

The agency will provide a way for producers temporarily selling in the U.S. to meet existing regulatory requirements. Officials say the change will provide Americans with more choices and ease supply shortages.

Dr. Robert Califf is the head of the FDA and Susan Mayne is the director of the agency's Center for Food Safety and Applied Nutrition. In a statement, they said: "The need to diversify and strengthen the U.S. infant formula supply is more important than ever."

They noted: "The recent shutdown of a major infant formula plant...has shown just how vulnerable the supply chain has become."

The U.S. has tried to increase supply of baby formula after federal officials in February closed a factory in the state of Michigan over safety concerns. The factory is operated by Abbott. The company is the largest U.S. producer of baby formula.

The factory reopened on June 4 after the company promised to take cleaning and safety measures. But it closed again in mid-June after severe weather caused damage to the plant.

The company said it needs time to repair the damage and clean the factory again after heavy storms went through southwestern Michigan on June 13.

In May, the FDA eased federal import regulations to permit baby formula to be shipped to the U.S. The administration of President Joe Biden then approved the use of the Defense Production Act. That law permits the government to direct economic activity to national defense. Use of the law provides federal support to get formula from foreign countries into the U.S.

The FDA has approved what is equal to 400 million 237-milliliter bottles for import into the U.S.

"Companies and their manufacturing facilities must meet rigorous FDA standards that ensure the formula is both safe and nutritious," Califf and Mayne said. "These standards are necessary to protect our children and will not be sacrificed for long-term supply considerations."

The term "standards" describes a level of quality that is required by a government agency.

The FDA's policy on foreign producers of baby formula will end in November. But the administration said it will renew the policy if necessary to secure enough supply in the U.S.

diversify— n. to include more suppliers of a product to ensure that product is available

regulatory — n. related to making or carrying out official rules for business activities

vulnerable — n. able to be hurt or damaged easily

facility –n. a building or large equipment that is built for a certain purpose

rigorous — n. done carefully and with a lot of attention to detail