Update Required To play the media you will need to either update your browser to a recent version or update your Flash plugin.
By Anne Ball
08 January, 2016

He was one of the most wanted men in the world.

Guzman was arrested in a raid on a home before dawn in Los Mochis, reported USA Today. That city is in Guzman's home state of Sinaloa. The Mexican Navy said that marines acted on a tip about Guzman's location. 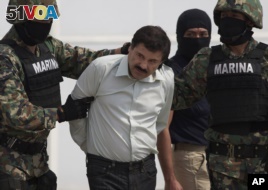 Guzman escaped from a maximum-security prison in Mexico last July 11. He broke out of the prison in a mile-long tunnel from his prison cell shower.

News outlets broadcast pictures of the elaborate shower and tunnel. A motorcycle carried him through the long tunnel, away from the prison.

Authorities have been hunting him ever since.

It was not his first time he escaped a maximum-security prison. The drug lord was first jailed after being forcibly returned, or extradited, from Guatemala in 1993. He escaped his maximum security prison in 2001. That time he was said to have escaped in a laundry cart.

He was found 13 years later in the seaside resort of Mazatlan. Guzman was returned to prison, only to break out again about 16 months later.

The Mexican government has been criticized for Guzman's escapes. Critics questioned whether El Chapo was able to buy off officials to escape.

Guzman is a wealthy drug lord. He is worth about $1 billion, say news reports. The U.S. wants him arrested for trafficking illegal drugs to this country.

If he is extradited to the U.S., he would be held at a maximum security prison in this country. That would make another escape very difficult.

CNN said the U.S. had a $5 million reward for his capture, and the Mexican government was offering $4 million for him as well.

Guzman is nicknamed "Shorty" for his small height.

Anne Ball wrote this story. Kathleen Struck was the editor.

bold – adj. not afraid of danger or difficult situation

shower – n. the area that holds the device to spray water on your body

elaborate – adj. planned or carried out with great care

laundry cart – n. a wagon to hold and move clean or dirty clothes