Update Required To play the media you will need to either update your browser to a recent version or update your Flash plugin.
By Caty Weaver
26 July, 2018


Facebook share prices dropped almost 20 percent Thursday. That is believed to be the largest one-day drop of any company on the American stock market.

The stock value drop amounted to a $119-billion loss.

One day earlier, Facebook had released a disappointing second-quarter financial report. The report said the social media site's user base and earnings had not grown as much as expected. The report also predicted far weaker growth in the future than had been expected. 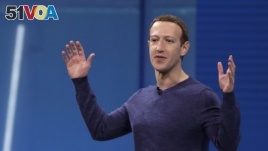 Facebook CEO Mark Zuckerberg delivers the keynote address at a Facebook developers conference in San Jose, California, May 1, 2018. Zuckerberg has come under fire from some groups for saying that Holocaust denial should not be banned on the social media p

Facebook has struggled in recent years with several privacy issues. But most experts believed the company had successfully dealt with them.

Many had come to consider Facebook almost immune to image problems, especially after the most recent scandal involving the British company Cambridge Analytica. The political research business collected private data of tens of millions of Facebook users. It provided that information to the 2016 presidential campaign of then-candidate Donald Trump.

Facebook has also faced public image problems because of the way Russia used the site to try to influence the 2016 U.S. presidential election.

Caty Weaver wrote this story. Ashley Thompson was the editor.

disappointing adj. - not as good as expected

immune n. - not influenced or affected by something

scandal n. - an occurrence in which people are shocked and upset because of behavior that is morally or legally wrong