Update Required To play the media you will need to either update your browser to a recent version or update your Flash plugin.
By Alice Bryant
17 August 2021


Thousands of jobless workers in Ho Chi Minh City are fleeing to their hometowns as the city extends coronavirus restrictions.

Ho Chi Minh City is Vietnam's largest city and is now the center of the country's worst outbreak since the start of the pandemic. Many people are leaving town on motorbikes, with their belongings loaded high. 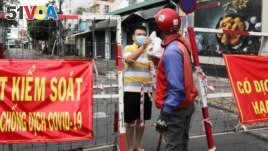 FILE - A man living in an area under lockdown receives food through a barricade during the coronavirus disease (COVID-19) pandemic in Ho Chi Minh City, Vietnam July 20, 2021. (REUTERS/Stringer/File Photo)

But officials are trying to prevent them from leaving and possibly spreading the virus to other parts of the country. Hundreds of motorbikes have been stopped at roadblocks around the city since Sunday.

Television video from areas outside of the city on Monday showed factory workers wearing full protective clothing. They were hurrying to get on trains and buses in a similar attempt to flee the most affected areas.

Officials with loudspeakers ordered people to continue social distancing and return to their homes. The sound of danger signals and shouting was everywhere as people attempted to leave.

Ho Chi Minh City has had most of the country's 6,141 coronavirus deaths, with more than 283,000 reported cases. The city of nine million people is seeing on average 241 deaths every day.

Many people are struggling to survive after losing jobs because of coronavirus-related suspensions of factory work. The Vietnamese government has announced that it will give out financial aid to its citizens.

Nguyen Van Hoan was traveling toward the central province of Ha Tinh, about 1,200 kilometers from Ho Chi Minh City by road.

"This is not my first attempt. I tried to leave the city weeks ago but was ordered to return to my place," he said.

Hoan lost his job two months ago. On his motorbike, he had put a suitcase, a supply of instant foods, water and a container of gasoline.

"Many people in my neighborhood have died," he told the Reuters news agency by phone. "If I stay, I'll die either from hunger and stress or from the virus," he said.

Hoan added that he had not gotten any aid from the government.

Healthcare centers and hospitals are now overcrowded, and hospitals have a shortage of workers. The government has ordered medical centers not to refuse patients.

suitcase – n. a large case that you use to carry your clothing and belongings when you are traveling

stress – n. a state of mental tension and worry caused by problems in your life