Update Required To play the media you will need to either update your browser to a recent version or update your Flash plugin.
By Pete Musto
14 June, 2019


The flags hanging outside Anwar Ragaua's house near the Indonesian city of Palu have led to warnings from the police. But the 50-year-old fisherman promises he is not taking them down.

The police were not there to help when he was the only one in his community to survive the tsunami that hit Palu last September. Neither were the government or aid organizations that came to the affected area in the hard-to-reach part of the island of Sulawesi.

Instead, the first people to offer him hope — and a new boat — were members of a conservative Islamic group known for violent acts.

"All this time I had often been offered similar assistance from various organizations, government and non-government, but they only made promises," Ragaua said. 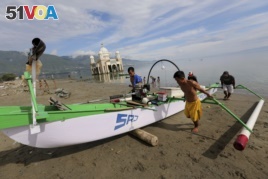 In this April 3, 2019, photo, local fishermen pull a boat to the beach as a mosque heavily damaged by the 2018 earthquake and tsunami is seen in the background in Palu, Central Sulawesi, Indonesia.

Today, the Islamic Defenders Front's white and green flag hangs outside Ragaua's house. So does a large black flag with white Arabic writing. Flags similar to it have become linked with violent extremism.

Since the Islamic Defenders Front group was established 20 years ago, it has pushed for Islamic law to govern the lives of Indonesia's 230 million Muslims. The group's leaders aim to correct what they see as the errors of Indonesia's 1945 constitution, which established a secular state and religious freedom.

The group has recently had some unexpected and surprising political victories. Its successes are only partly due to the growth of conservative Islam in Indonesia.

The group's success also can be linked to a 10-year effort to repurpose its militia. It has turned its fighters into a force that is skilled at helping the poor and searching for victims of natural disasters.

Researchers say members of Indonesia's military formed the Islamic Defenders Front after the fall of former president Suharto in 1998. They say the group formed as a tool for dealing with pro-democracy activists and liberalism.

The group was able to act without fear of punishment from the law. And it became known for criminal activities and violent attacks. It now has members in 23 of Indonesia's 34 provinces and a military-like command structure.

Maman Suryadi Abdurrahman is the head of the front's Islamic Defender Troops militia. He told the Associated Press the organization has one million members. Researchers have said its membership is much smaller, estimating that it numbers in the tens of thousands. 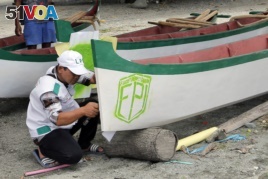 In this April 2, 2019, photo, a member of Islamic Defenders Front paints their group's logo as they help local fishermen to build boats at a fishing village affected by the 2018 tsunami in Palu, Central Sulawesi, Indonesia.

The group does not propose that Indonesia become a caliphate -- a state run by an Islamic ruler. Instead, the group says it wants Islamic law to govern the nine out of 10 Indonesian citizens who are Muslim. Its leaders wear the red-and-white Indonesian flag on their official clothing and often work with nationalistic causes.

The group says it has eased some of its violent methods. But it still forcefully deals with what it calls "community diseases" such as sex work, same-sex relationships and celebrations of Western holidays. It does so, it says, at the request of local communities.

"We've tried to improve our image," Abdurrahman said. "We've changed the ways of our demonstrations to be more persuasive and peaceful."

In doing so, it has followed the same path as other deeply conservative groups in Indonesia, including Hizbut Tahrir. This group, which does seek a caliphate, was banned last year.

Alexander Arifianto is an Indonesian politics expert at the S. Rajaratnam School of International Studies in Singapore. He said Indonesian groups copied Egypt's Muslim Brotherhood, which led Islamic charities in the 1970s and 1980s and became very popular.

The Islamic Defenders Front's aid effort is known as Red Crescent Indonesia. It is not part of the International Federation of Red Cross and Red Crescent Societies. But it was very busy last year.

Along with the Palu disaster that killed more than 4,000 people, earthquakes killed hundreds and destroyed thousands of homes on the island of Lombok. A tsunami also caused major damage on the Sunda Strait coastlines of Java and Sumatra.

Indonesia is made up of 17,000 islands. Its central government has often been accused of ignoring hard-to-reach areas far from Java, the center of political and economic power.

But the Islamic Defenders Front was right there at each disaster. Its members searched for victims, gave out aid and built temporary housing and new religious centers. Its usual social services -- such as free health care -- have become important for poor people in cities.

The front's rising political power was notable in 2016 and 2017, when it organized hundreds of thousands to protest the Christian governor of the capital, Jakarta.

Stephen Wright reported this story for the Associated Press. Pete Musto adapted it for VOA Learning English. Ashley Thompson was the editor.

We want to hear from you. Where do people turn to in your country when the government fails to deal with natural disasters? Write to us in the Comments Section or on 51VOA.COM.

various – adj. used to refer to several different or many different things or people

error(s) – n. something that is not correct

liberalism – n. belief in the value of social and political change in order to make progress

province(s) – n. any one of a the large parts that some countries are divided into

nationalistic – adj. relating to or showing belief that your country is better and more important than other countries

persuasive – adj. able to cause people to do or believe something