Update Required To play the media you will need to either update your browser to a recent version or update your Flash plugin.
By Brianna Blake
2010-5-21 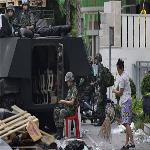 Photo: AP
A woman sweeps in the wreckage near Thai soldiers soon after anti-government protesters were crushed in Bangkok

Thailand's prime minister is urging national unity after ten weeks of anti-government protests in the capital. Abhisit Vejjajiva says the government has returned order in Bangkok and the provinces.

In a speech Friday he said he recognized the divisions that have taken place in the country. He promised that the government will meet what he called "the huge challenges ahead of us."

On Wednesday, the Thai army removed the protesters by force from their camp in the city center. The military operation left at least seven people dead. Days of violent clashes and rioting caused more than one billion dollars in damage.

Naruemon Chabchumpon is political science director at Chulalongkorn University. She says the Red Shirts damaged their public image by their actions. At first the leaders demanded new elections. The government proposed elections for November, and the Red Shirts accepted.

But later they made other demands, like arrests of government officials. By the end, the professor says, the Red Shirts were continually changing their demands.

NARUEMON CHABCHUMPON: "So at that time I think the public in Bangkok feel that, or start to wonder, what is their real demand?"

When the military finally moved against the protesters, there was armed resistance. Protesters shot at soldiers and set fire to buildings including big stores.

Red Shirts and human rights groups condemned the government's use of deadly force to end the protests.

Since the demonstrations began in March, at least eighty-three people were killed and one thousand eight hundred wounded. The protests have also hurt tourism, a major industry in Thailand.

The protesters largely support Thaksin Shinawatra, the prime minister overthrown by the army in two thousand six. His policies made him popular with much of the rural and working poor. But much of the middle class and urban wealthy accused him of corruption and abuse of power.

Thailand's political crisis is often described simply as a fight between the poor and the rich. Yet in the south, for example, support for the protesters is low even among the poor. And in the northeast, many middle-class people support the Red Shirts.

Thaksin Shinawatra went into exile in Cambodia to avoid a prison sentence for corruption. The government says he helped organize the protests, a charge he denies. He has called for an outside negotiator to settle the crisis, an idea the government rejects.

And that's IN THE NEWS in VOA Special English, written by Brianna Blake with additional reporting by Brian Padden in Bangkok. I'm Steve Ember.